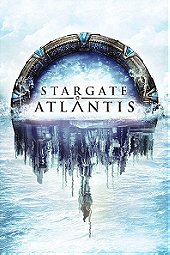 I started watching Stargate Atlantis on a whim and I am incredibly glad I did.

The general story of of a mostly scientific team heading off into the far reaches of outer space with a possibility of never returning to Earth was an intriguing one. Plus the Wraith are one of the best villains since The Borg.

However a number of the season one episodes were run of the mill, the exceptions being "The Storm", "The Eye", "Letters from Pegasus" and the season ender. What kept me watching were the characters - particularly Sheppard, McKay and Teyla and the mix of humor, action and drama.

Since then the show has continually improved, the story lines have gotten more focused, the character development is great - McKay in particular has the best stories - McKay and Mrs. Miller, The Shrine are both great standouts.

Season five has some of the best episodes that I have seen from SGA and so I was really shocked to learn that show was being cancelled.

For good television, you cannot go wrong with Stargate Atlantis.