The Mummy: Tomb of the Dragon Emperor review
893 Views
5

The Mummy: Tomb of the Draggin' Bore-fest! 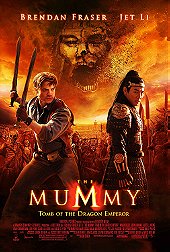 
I never thought I'd ever say this, but bring back Stephen Sommers! The two previous The Mummy adventures undoubtedly suffered from Sommers' absurd excesses; nevertheless they were at least fun. The original 1999 flick The Mummy was an enjoyable tribute to the old campy movie serials. Said original film used special effects sparingly, as opposed to being driven by them. As a result, The Mummy is always terrific entertainment: its casual, throwaway qualities ensured it could be viewed constantly and one could continually enjoy the entertaining romp being offered. In The Mummy Returns, Sommers turned to an action/adventure powered by poorly-rendered special effects and re-used scenarios. This sequel didn't work particularly well as it was daft, inane and too over-the-top to be believable. Be that as it may, it was still so much fun!

With Stephen Sommers extracted from the director's chair (hitting the sidelines as a producer), Rob Cohen filled his position. After watching The Mummy: Tomb of the Dragon Emperor I seriously doubted whether Rob Cohen had ever even seen the two forerunners. Where Sommers created highly entertaining action/adventure flicks that bounced along at a satisfying pace with Brendan Fraser in top form, Cohen creates a boring, cold and lifeless husk.

The problems stem mainly from the script: it's riddled with clunky elucidation, tedious characters, a story that's too extensive to care about, and plot developments lacking inspiration. The cast look bored, with heroics and witticisms appearing forced and routine. Charisma-free characters dominate the screen. The once-charming Brendan Fraser is a frosty and pale imitation of his former self. The film screws up the timeline of the series in terms of character ages, and it eventually turns into a shameless self-parody. Even the character of Evelyn (Bello replaces Rachel Weisz) has written books about the adventures she underwent during the events of the first two films. Furthermore, the events of The Mummy are published by Evy in a novel entitled The Mummy. Likewise with the follow-up. How very creative, Mr. Cohen.
In a nutshell: The Mummy: Tomb of the Dragon Emperor is a colossal disappointment. It could have at least been 110 minutes of entertainment, instead it supplies 110 minutes of lacklustre action and poor writing. A series that shamelessly aspired to be an Indiana Jones facsimile has transformed into this feeble, third-rate, unremarkable claptrap that I couldn't even recommend to my enemies.

The film is set many years following the occurrences of The Mummy Returns. We find keen globe-trotting adventurer Rick O'Connell (Fraser) living a boring, albeit affluent life in a large mansion with wife Evelyn. Just after the conclusion of World War II, the husband and wife duo officially decide to throw in the towel and retire. Their son Alex (Ford, who's only 13 years younger than Fraser) has, unbeknownst to his parents, dropped out of university to go dig for a mythical tomb in the desolate sands of the Chinese outback. (Like father, like son...how very imaginative) Alex proves successful in his dig, and unearths a tomb belonging to Emperor Han (Li). Many thousands of years ago, Han was a tyrannical leader who ruled China with a barbarous fist until his sorceress (Yeoh) placed a curse on him and his 10,000-strong army. If Han is ever resurrected, he'll rule the world. Upon disturbing Han's tomb, Alex runs into malevolent forces who wish to awaken the ancient emperor and allow him to dominate the Earth. As fate would have it, Rick and Evelyn come out of retirement for one last job and find themselves inadvertently entangled in another adventure with another sacred walking corpse.

It's been reported that the creators of The Mummy: Tomb of the Dragon Emperor wanted to take the profitable series in another direction. They step away from the character of Imhotep (the focus of the prior two flicks) and replace him with some boring Asian emperor. I will admit that bringing back Imhotep again would have been a long shot. But replacing him with another mummy is lame. If the filmmakers wanted to take Fraser's Rick O'Connell on another adventure, why not take his adventures away from mummies?! Indiana Jones hunted for artefacts and it took him to vast cultures. His adventures were refreshing and fascinating. Everything is just messed up here.

Those seeking popcorn entertainment can look elsewhere - this film does not entertain. The script, as I previously stated, is awful. The two writers don't produce anything worthwhile. Sommers filled his movies with interesting supporting characters (in the first film we had the Americans, and Winston the plane pilot. The second film had Izzy) and wittiness in his dialogue. The one-liners aren't funny in the slightest here. The script reduces the dialogue to awkward conversations about sex and even flirting with a yak! Some of the cumbersome scenarios are riddled with pathetic and predictable lines, usually given to the now tiresome John Hannah. The rest of the dialogue is predominantly unfunny and trite. It even feels the need to reference the previous films quite frequently. An hour of nostalgia becomes very monotonous very quickly. The movie tries to entertain its target audience with frenetic action and daring escapades, but the awful writing and incompetent direction leave the film far short of its aspirations. There's a long chase through Shanghai that's meant to be chaotic and intense. However the camera flies around so awkwardly and wildly that I lost track of what was occurring.
Even more painful is how illogical everything is. An example would include all the action unfolding in the streets of Shanghai with no police in sight. The civilians appear to see the feverish chase and resurrected mummy as something not to be afraid of. Suspension of disbelief is a given when it comes to summer blockbusters, but this is just ridiculous! Even more unbelievable is Michelle Yeoh's sorceress character that created the curse of Emperor Han. Why can't this oh-so-powerful sorceress just cast a spell to stop the resurrected mummy to begin with?
By the end you'll be mocking the film with a vengeance. Like when a character sees a massive structure and exclaims "Shangri-La!" one will want to murmur "It's only a model".

Then there's the matter of the eye roll-inducing Yeti snow monsters that make an appearance. Things become so dim-witted that said Yetis dispatch a few enemies, and then triumphantly raise their arms like NRL referees signalling a successful field goal!! The special effects do, to some extent, look impressive. It must be said that CGI was never a high point in the first two Mummy films, but this marks a noted improvement. 60% of the time the CGI looks quite good, such as the emperor as a computer generated creation, or the dragon that appears towards the end of the movie. At other times the CGI is nothing to brag about. The Yetis are a prime example.

The battles grow increasingly stupid towards the end. For example, an army of the dead is raised and one particular soldier knocks the head off his comrade before frantically trying to assist with re-attaching the head. This stuff ain't funny! There's so much wasted potential as well. The dragon is given a few minutes to shine if that! There's also the over-hyped battle between Jet Li and Michelle Yeoh. Seriously, that dual is "blink-and-you'll-miss-it" stuff. It lasts less than a minute. Jet Li is also wasted as 80% of the time he's an entity created entirely out of CGI. If you can get Li in a film, why waste him like that?!
The attention also shifts from Brendan Fraser to the appalling Luke Ford. Fraser and Ford do not look like father and son. They almost look like brothers! It's really freakish stuff. 2008 saw the fourth Indiana Jones adventure with aging Harrison Ford accompanied by the youthful Shia LeBeouf. That made sense. But this is just weird!

All in all, I found The Mummy: Tomb of the Dragon Emperor to be exasperatingly tedious and utterly mindless. It may look competent in terms of special effects, but it's bereft of any memorable moments and it grows really boring. It seems Rob Cohen believed he was creating a godsend to the franchise, hence the complicated plot. With a hefty plot such as this, however, the fun and entertainment value becomes buried deeper than a mummy's tomb. Had it gone really over-the-top it would still have been an embarrassment to the series, but at least it would have been a fun embarrassment to the series. What we've been given is a dreary and frivolous embarrassment to the series.
The one-liners are so painful that you'll develop a newfound respect for Arnold Schwarzenegger. Yes, I mean that!
It never even seems like an instalment in the Mummy series because of how out-of-place everything feels. The closing subtitle is like firing a bullet into a knife wound. It's painful stuff! I never found much value in Rob Cohen's prior flicks, and his despicable signature is unmistakably placed on this film. At 110 minutes, the film is simply too fatiguing and gruelling. Cutting the film down wouldn't have made it better...but it at least would have made everyone a little happier.