The Father of Emergent Gameplay 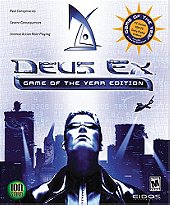 One word best sums up this game: possibilities. I think many games try to funnel you into a certain way of playing to the point where it has a numbing effect on a person's creative faculties. You become a habitual slave to custom and play a game without any wit, wonder or imagination. Warren Spector et al set out to strip away those artificial barriers in the hope of setting free those impulses or sparks of unorthodoxy and of course impudence. Without them who could've known besides blowing shit up, there is a secondary purpose to mines, like for example using it as pitons for climbing walls? This is a classic example of emergent gameplay. Creating something out of nothing. One of my favourite discoveries in this vein is recognising how useful a MIB unit can be. I figured that since it explodes during death, the explosion might help me open a locked container or even a door. So I lured it next to one when I had whittled it down to low health before delivering the fatal blow. Just as I had planned it, the container was blown open and the booty was there for the taking. Only in this way could I nab a lot of treasure and get into restricted areas without the need to waste lockpicks or spend so much skill points. This is just one of many, many examples of what you can do in Deus Ex. It rewards you for being left-field.

You can clearly see the influence of Deus Ex in games today, a prime example being Crysis. Not a lot of people, particularly those who are more of the console gaming persuasion knew how to play that game properly. Or rather they do not know how to 'create their own fun' and let the game go on rails so to speak. If it did not have robust rpg elements to provide another anchor to the gameplay, the same sentiments would've emanated from the feedback of Deus Ex. In fact most people who even professed a liking of the game did not really understand its true beauty. You won't find an explanation in reviews and tribute write ups. They mainly look at things in face value such as its story, character development system, level design etc. The fact that it can stand on these merits and still be called a quality game is an achievement in itself. But I'm a little worried that the most important and defining part of the game is going to be lost amongst its other praised aspects particularly to future generations. I certainly felt that way when I played the third game; the developer understood the appeal of multiple branching pathways but not much agency was granted to manipulate the game mechanics.

Even to this day, I still feel that Deus Ex 1 is the only Deus Ex that truly mattered. I never really got into the sequels. They're mere shadows of its predecessor's self. Invisible War for being consolised and Human Revolution for having little freedom.