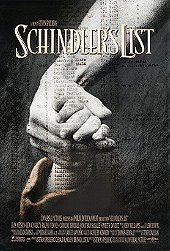 I have watched this film many times and it never lost its emotiveness or poignancy.

The whole film is like a stab in the gut; scene after scene of terrifying acts of genocide, racial hatred and sadism that defined The Holocaust.

Filmed with art and dignity; it is by no means a gory 'snuff' film like 'The Passion'. Filmed in black and white throughout and thrown into colour at the end; when hundreds of present day Jews (many of them Schindler's workers) come to pay their respects to him.

Liam Neeson acts superbly throughout; after all his work Schindler feels nothing but guilt at how many more he should have saved. This scene in particular had me reaching for the cleenex.

There is no obvious happy ending as is typical with Spielberg. Despite Schindler's work, we are still left with the overwhelming loss of people and the devastating effect the nazi regime had on those who did survive.

This film raises the deepest levels of disgust in me for the acts of the nazis; while simultaneously evoking a pride and respect for those suffered through the regime. It is the real and disturbing subject matter, dealt with so well, that puts this film head and shoulders above any act of fiction.

Favorite Horror: The 2000's by xxxTheRipperxxx

Films reviewed by Hellsing920 by AVPGuyver21

The Most Visual Movies of All Time by devinight

The Mean Streets of America by The_Dash08

THE BEST MOVIES EVER by pols