A great career choice for Sly! 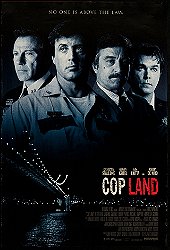 
Cop Land is a film that changed my overall view of actor Sylvester Stallone. For Stallone, he wanted to bury the type-cast action hero and star in something different. I was very impressed with the results here.

Sheriff Freddy Heflin (Stallone) lives in the pleasant town of Garrison, New Jersey. For years he has turned a blind eye to the police corruption that he has no control over; after all, Freddy cannot to anything to prevent this in a town full of cops. But as the stench of corruption worsens, Freddy finally realises that the town is filled with mob connections and murder and can ignore it no longer.

The cast is absolutely first-rate and cannot be flawed. Stallone, Robert De Niro, Ray Liotta, Harvey Keitel, Robert Patrick, Michael Rapaport...the list goes on. All big names that I found to be exceptional in this dialogue-orientated crime drama.

The first half of the movie sells the premise exceptionally and presents us with strong movie-making. Unfortunately a section in the second half turns over to conventions and predictability, but this is worth it for the tremendously entertaining and extremely violent conclusion.

Writer/director James Mangold does an extraordinary job. He presents us with a very plausible plot, and some good twists. It's a shame, though, that some of the twists aren't properly distinguished.

Stallone proves very able at drama rather than action, and his dialogue is more understandable than usual.

Overall, Cop Land is highly entertaining and extremely well crafted. Marred only by traditional conventions that appear in this genre too frequently. It's a shame that this movie is so overlooked! Recommended.