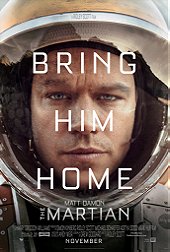 After the disappointing 'Prometheus', the almost abysmal 'The Counselor' and the really underwhelming 'Exodus: Gods and Kings', I was starting to loose faith in Ridley Scott and I can’t say I was expecting much from this flick. I mean, sure, I'm glad that the guy, at almost 80 years old, is still incredibly productive but what's the point of releasing a new movie virtually every year if they are all going to be half-baked? Fortunately, this one managed to get a pretty good buzz before it was released so there was some hope. Eventually, I have to admit that it was indeed pretty good but, to be honest, it didn’t really manage to completely blow me away though. I mean, the whole thing looked really good, it was really entertaining and it was very nice that Scott tried to make a smart movie for once but it was still missing something in my opinion. I guess, at the end of the day, even though they tried really hard to convince us that it was really clever, I think it was still too shallow, like most of the movies directed by Scott. For example,  not so long ago, I saw 'All is lost', another movie about Robert Redford all alone trying to survive on a drifting boat and even though it wasn’t really great, I really had the feeling that the guy could die every 5 minutes and you could really feel the mental agony that the main character must have felt through his ordeal. Here,  even though Matt Damon did deliver a solid performance, I never felt that the main character's life was really at risk and the fact that he keeps cracking jokes all the time might have been fun to watch and easier to swallow but it also really diminished the psychological impact  of what he was actually going through. It is like adding all these other characters, it actually distracts us constantly from  how messed up his situation actually was. Still, for a popcorn movie, it was at least not dumb at all and I have to admit that the damned thing was actually seriously entertaining. Anyway, to conclude, even though I think it is actually overrated, it is still a really good flick though and one of the best made by Ridley Scott in the last 10 years.