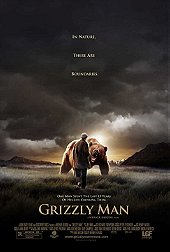 "Is it going to happen that one day we read a newspaper article about you being eaten by one of those bears?"

David Letterman asks the question with a sarcastic grin and the studio audience laughs, but sure enough, in 2003, his blonde-haired, unknown guest Timothy Treadwell was, along with his girlfriend Amie Huguenard, to be torn apart and devoured by a grizzly in Alaska’s Katmai National Park.

I’s not really a mystery why the bear did it: unused to Treadwell’s presence and hungry, it was merely following the course of nature. The real question is what exactly was Treadwell doing every summer in wild bear territory, shut off from human society and constantly exposed to mortal danger. This is the question addressed by Grizzly Man, Werner Herzog’s latest probe into the dark heart and soul of man.

An amateur environmentalist and self-styled "kind warrior" in the cause of bear conservation, Treadwell chose to live his life on all kinds of edges, geographical, psychological and spiritual, making him the perfect subject for Herzog, whose many films, whether fictional or documentary, have tended to examine primordial wildernesses and extreme personalities. As Herzog’s voice-over dryly implies: "I have seen this kind of thing myself", Treadwell’s erratic behavior and irrational outbursts place him not a million miles from the director’s own most beloved actor and "best fiend", Klaus Kinski. Yet, not even Kinski, for all his bestial conduct, actually desired to become a bear, and it is Treadwell’s ambivalence towards his own humanity, coupled with his flawed need to connect with animal life, that makes him so fascinating. This is a man with far more contradictions and complexities than will ever be found in a she-bear who eats her own young.

Though Herzog has interconnected into the film, his own interviews with Treadwell’s friends, family, supporters and critics, most of the footage in the documentary has been edited from the hundred or so hours of film that Treadwell himself shot during his last five summers at Alaska. This footage of grizzlies in their native habitat is simply thrilling and communicates something of his awe for the majestic creatures that he loved so much, while the alarming proximity of camera to bear serves as a constant reminder of the huge risks he was taking.

Even more striking, however, as Herzog has so wisely recognised, are the moments when Treadwell turns his camera on himself, baring his megalomania, paranoia, vulnerability, loneliness and despair. These are the private, often embarrassing, confessions of someone painfully aware of his own all-too-human weaknesses, and trying consciously to conquer them by becoming some kind of superhero, beast, or just plain dead. It is a compelling drama, at times funny, at times shocking, but always tragic. Herzog never tries to hide Treadwell’s fate, from the beginning of the film we already know what will happen to him, but what’s worse is that Treadwell seems to expect it from the beginning too.

The predominance of his footage makes Treadwell, in effect, the film’s posthumous co-director, while Herzog is for the most part the voice-over. Still, as he has shown in the many audio commentaries for the DVD editions of his own films, Herzog is an engaging and incisive exegete with a poetic turn of phrase, and here he goes from expressing admiration for Treadwell’s talents as a filmmaker to gently teasing out the more delusional aspects of his worldview.

As a character critique it is hardly a mauling, for Herzog is too sophisticated a thinker, too respectful towards his subject, and altogether too humane to tear Treadwell apart for a second time. Rather, he presents him with palpable affection, but also a certain sternness, as though the bear expert were his own son, and he the grieving father, driven to find some sort of meaning in a death so horrific and pointless.

Rarely is a documentary so beautiful, so moving, and so vital, one of the greatest masterpieces of a filmmaker’s carrer that gathers through over 40 years a more than well-deserved place among the greatest icons of cinema.