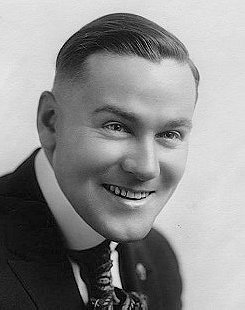 Familiar to many as the frustrated cop, businessman or landlord in countless two-reel comedies by The Three Stooges, Vernon Dent got his start in show business as a member of a singing troupe traveling in Southern California in the early 1920s. He was befriended by comedian Hank Mann, a member of the famed Keystone Kops. Mann thought that Dent was good comic material and gave him a supporting part in a series of two-reel comedies he was making. In the early 1920s Dent was good enough to be given his own series of comedy shorts by Pathe. After this series was over, he freelanced and worked for such top comics as Larry Semon. He found his real niche when he was hired by Mack Sennett, and spent most of the rest of the 1920s at that studio. For such a large man (5'9" and 250 pounds) Dent was surprisingly graceful, and Sennett was enthused to discover that he was a natural at physical comedy, able to do a pratfall as well as or better than Sennett's top comics. Dent really came into his own in the series of comedies that Harry Langdon made for Sennett, which rocketed Langdon to stardom and also brought recognition to Dent. When Langdon left Sennett, Dent stayed and supported such Sennett comics as Billy Bevan and Ralph Graves. Dent and Langdon were reunited in a series of shorts for Educational Pictures in the early 1930s, and his value in the series was such that Langdon insisted Dent always receive second billing after him. Dent joined Columbia in 1935, where he achieved his greatest success, and stayed there until 1953. He worked especially well with Shemp Howard of The Three Stooges, and the two remained lifelong friends. Shortly after retiring in the mid-'50s, Dent went blind, a result of his lifelong battle against diabetes. Although there were rumors that he died because he was a Christian Scientist and refused to take insulin, in an interview several years ago Dent's wife stated that he was not a Christian Scientist, and died from a sudden, massive heart attack. ... (more) (less)
Tags: American (1), Died 1963 (1), Born 1895 (1), Died Aged 68 (1)
My tags:

2. Only Angels Have Wings

4. Only Angels Have Wings

2. The Lady in Question