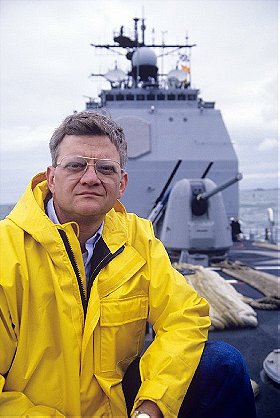 Tom Clancy was born at Franklin Square Hospital in Baltimore, Maryland, on April 12, 1947, and grew up in the Northwood neighborhood. He was the second of three children to Thomas Clancy, who worked for the United States Postal Service, and Catherine Clancy, who worked in a store's credit department. His mother worked in order to send him to the private Catholic Loyola Blakefield in Towson, Maryland, from which he graduated in 1965. He then attended Loyola College (now Loyola University) in Baltimore, graduating in 1969 with a degree in English literature. While at university, he was president of the chess club. He joined the Army Reserve Officers' Training Corps; however he was ineligible to serve due to his nearsightedness, which required him to wear thick eyeglasses. After graduating he worked for an insurance company in Hartford, Connecticut. In 1973, he joined the O. F. Bowen Agency, a small insurance agency based in Owings, Maryland, founded by his wife's grandfather. In 1980, he purchased the insurance agency from his wife's grandmother, and wrote novels in his spare time. While working at the insurance agency, he wrote The Hunt For Red October. ... (more) (less)
My tags: