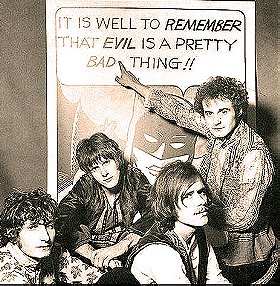 1 vote
View all The Nice pictures
The Nice were an English progressive rock band from the 1960s, known for their blend of rock, jazz and classical music. Their debut album, The Thoughts of Emerlist Davjack was released in 1968 to immediate acclaim. It is sometimes considered[according to whom?] the first truly progressive rock album. The Nice are also a forerunner of the much more widely known Emerson, Lake & Palmer.
My tags:

5. The Thoughts Of Emerlist Davjack
View all The Nice music (1 more)

rickterenzi voted for 6 images [View All] 1 month, 4 weeks ago

Mass. Patriot added this to a list 2 months, 1 week ago

"This 1968 video is terrific...first the Swiss dancers, WOW "spaghetti" hairdo and miniskirts...second the Presenters : tall, blonde and beauty the German Swiss girl, small, brunette and NOT Hippy dress for the one from Ticino...third : the German TV gay dude !!! FANTASTIC !!! Keith Emerson...in my mind in my heart "

Mass. Patriot voted for an image 2 months, 1 week ago