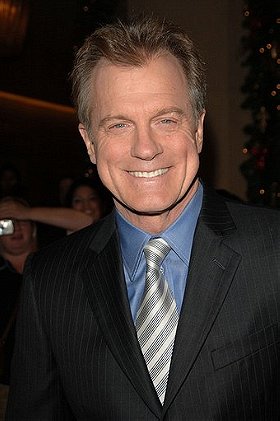 Collins was born in Des Moines, Iowa, the son of Madeleine (née Robertson) and Cyrus S. Collins, an airline executive. Collins is the great-great-grandson of General James Baird Weaver, the 1880 Greenback Party presidential candidate and the 1892 Populist Party ("People's Party") candidate for president. Collins was raised with his two older brothers in Hastings-on-Hudson, New York and attended Amherst College, graduating cum laude. He played bass guitar and rhythm guitar in a number of rock and roll bands at Amherst, including Tambourine Charlie & The Four Flat Tires, The Naugahyde Revolution (with Jim Steinman, then a fellow student, on keyboards), and The Flower & Vegetable Show (he has played his guitar on 7th Heaven, It's Always Sunny in Philadelphia, and in the 2007 romantic comedy Because I Said So).

Collins' Broadway credits include his 2008 role as King Arthur in Spamalot and prior appearances in Moonchildren, The Ritz, The Loves of Anatol, and No Sex Please, We're British; Off Broadway he appeared opposite Sigourney Weaver in Christopher Durang's Beyond Therapy, as Macduff to Christopher Walken's Macbeth at Lincoln Center, and as husband to Julie Andrews (with whom he shares a birthday) in the Stephen Sondheim revue, Putting It Together at Manhattan Theatre Club in 1993.

As previously mentioned, Collins probably is best known for his role as the Reverend Eric Camden in more than 200 episodes of the television series 7th Heaven, though he also notably portrayed Captain/Commander Willard Decker in Star Trek: The Motion Picture. Reverend Camden's wife, Annie, is played by fellow Star Trek alum Catherine Hicks (she played Dr. Gillian Taylor in Star Trek IV: The Voyage Home). Additional television credits include Jake Cutter in the cult favorite Tales of the Gold Monkey and Tattingers, as well as guest appearances in The Waltons, Barnaby Jones, Charlie's Angels, and numerous miniseries and made-for-television movies. He was nominated for an Emmy Award for his work opposite Ann-Margret in the minseries The Two Mrs. Grenvilles and he played John F. Kennedy in the miniseries A Woman Named Jackie, which won the Emmy for Best Miniseries.

Collins and his 7th Heaven co-star Beverley Mitchell are the only two original cast members to appear in every single episode. Collins has co-starred with Diane Keaton in two movies: The First Wives Club (1996) and Because I Said So (2007).

Collins appears as a series regular in the ABC series No Ordinary Family.[3] Collins also appeared as a potential love interest/boyfriend for Ron Rifkin's character Saul Holden, on ABC's Brothers & Sisters, in fall of 2010. He also appeared in the eighth season of The Office playing Andy Bernard's dad in the episode "Garden Party".

Leo added this to a list 3 years, 11 months ago
Another Top 10 Career Finishing Scandals (10 person items)