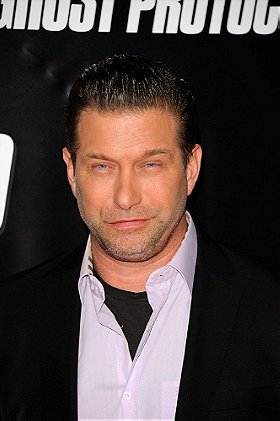 Met his wife, Kennya Baldwin, on a subway in New York.

When not acting, lives on his ranch in Tucson, Arizona.

Supports George W. Bush on the basis of faith. Like Bush, Stephen is a born-again Christian.

No relation to actor Adam Baldwin.

Brother Alec Baldwin told him that doing Bio-Dome (1996) could be the single most career ending decision he could possibly make.

Resides in the village of Nyack, New York, with his wife, Kennya, and their family. In 2006, he launched a campaign to prevent an adult bookstore from opening on the outskirts of the village.

Was cast in Ty Murray's "Celebrity Bull Riding Challenge" (2007) and was among nine celebrities cast on the show. In the very first episode, Baldwin was injured after taking a bad fall from a bull, breaking his shoulder blade and cracking a rib. Under doctor's orders, he had to give up going to Nashville and left the show in the second episode. He returned for the last episode in Nashville to support the other riders and was given a rodeo buckle by Ty Murray, along with the other riders, for his attempt.

Was baptized a Roman Catholic, but became a born-again Christian in the Evangelical church shortly after the September 11 attacks. Since converting, he has been on missions to evangelize the youth of the nation through projects such as The Breakthrough Ministry, which involves skateboarding and extreme sports and Christian rock concerts.

Endorsed Mike Huckabee as his choice for Republican candidate in the 2008 presidential election.

His Rockland County, New York home has been foreclosed upon and will be auctioned on June 24, 2009.

3. The Flintstones in Viva Rock Vegas

Brian G added this to a list 6 years, 4 months ago

nehocb added this to a list 6 years, 5 months ago

"Actor and former Celebrity Apprentice contestant On CNN’s Don Lemon, Baldwin said “I think he’s (Trump) fantastic. I love him. I think he’d make a great president. Because he’s not a politician. And he doesn’t care what anybody thinks. And that’s why he’s surging in the polls.”"