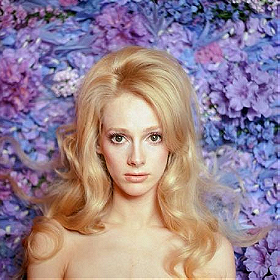 She was nominated for an Academy Award for Best Supporting Actress in 1968 for her performance in The Heart Is a Lonely Hunter. She went on to appear in such films as Willard in 1971, and six films with then-partner Clint Eastwood between 1976 and 1983: The Outlaw Josey Wales, The Gauntlet, Every Which Way But Loose, Bronco Billy, Any Which Way You Can, and Sudden Impact.

She published her autobiography, The Good, the Bad, and the Very Ugly – A Hollywood Journey, in 1997.

Locke was born in Shelbyville, Tennessee, the daughter of Raymond Smith, a military man, and Pauline Bayne Locke, a pencil factory worker. Her parents separated before she was born, and her mother married construction company owner Alfred Taylor Locke, whose name she took. From that marriage, Locke has a maternal half-brother, Don (born 1946).

Locke was a cheerleader and class valedictorian in junior high. She graduated from Shelbyville Senior High School in 1962. She then attended Middle Tennessee State University for two semesters. The 1963 Midlander yearbook has a photo of her appearing in an MTSU theater production of Arthur Miller's play, The Crucible.

In 1967, Locke won a nationwide talent search for the role of Mick Kelly in The Heart Is a Lonely Hunter opposite Alan Arkin. The film was released in 1968, with Locke's performance garnering her the Academy Award nomination, as well as two Golden Globe Award nominations for Best Supporting Actress – Motion Picture and Most Promising Newcomer – Female.

Locke's next film role was as Melisse in Cover Me Babe (aka Run, Shadow, Run) opposite Robert Forster. In 1971, she starred in the cult film Willard with Bruce Davison and Ernest Borgnine. Throughout the first half of the 1970s, Locke appeared on television in several drama series including The F.B.I., Cannon, Barnaby Jones and Kung Fu. In the 1972 Night Gallery episode "A Feast of Blood", she played the victim of a curse planted by Norman Lloyd; the recipient of a brooch that devoured her. Locke also played the title role in The Second Coming of Suzanne, an experimental film released in 1974.

In 1976, Locke had a supporting role in The Outlaw Josey Wales as Laura Lee, a pioneer from Kansas who falls in love with the eponymous character (Clint Eastwood). This was followed by a lead role alongside Eastwood in the hit action film The Gauntlet (1977). In 1978, the couple co-starred with an orangutan named Clyde in that year's second highest-grossing film, Every Which Way But Loose, in which Locke played country singer Lynn Halsey-Taylor. The 1980 sequel, Any Which Way You Can, was equally successful. Locke recorded several songs for the film's soundtrack and has performed live in concert with Eddie Rabbitt and Tom Jones.

Locke starred as a bitter heiress who joins a traveling Wild West show in Bronco Billy (1980), her only film with Eastwood not to become a major box office success. Their final collaboration was Sudden Impact (1983), the highest-grossing film in the Dirty Harry franchise, in which she played a vengeful artist who murders the men who gang-raped her sister and her a decade prior.

In 1986, Locke made her directorial debut with the feature film Ratboy, a fable about a boy who is half-rat. Her second directorial effort was the critically acclaimed thriller Impulse (1990), starring Theresa Russell as a police officer who goes undercover as a prostitute. Later, she directed the made-for-television film Death in Small Doses (1995), based on a true story, and the independent film Do Me A Favor (1997).

After thirteen years away from acting, Locke returned to the screen in 1999 with supporting roles in the straight-to-cable films The Prophet's Game (opposite Dennis Hopper) and Clean and Narrow. In 2014, it was announced that Locke would serve as an executive producer on the Eli Roth film Knock Knock starring Keanu Reeves.[

Locke married sculptor Gordon Anderson on September 25, 1967. Locke has stated in court papers that the marriage was never consummated and described her relationship with Anderson as "tantamount to sister and brother," although they remained legally married.

From 1975 until 1989, Locke cohabited with actor Clint Eastwood. In the late 1970s, Locke underwent two abortions and a tubal ligation. According to her autobiography, she decided to have the procedures because Eastwood insisted parenthood would not fit into their lifestyle.[11] She later discovered Eastwood secretly fathered two children with another woman during the last three years of their relationship.

In 1989, Locke filed a palimony suit against Eastwood, after he changed the locks on their Bel-Air home and placed her possessions in storage while she was directing the film Impulse. The two parties reached a settlement in 1990, when Eastwood set up a film development/directing pact for Locke at Warner Bros. in exchange for dropping the suit.

In 1995, Locke sued Eastwood for fraud, alleging that he had compensated Warner Bros. to keep her out of work–the studio had rejected all of the 30 or more projects she proposed, and never assigned her to direct any of their in-house projects. According to Locke's attorney, Eastwood committed "the ultimate betrayal" by arranging the "bogus" film directing deal. In 1996, just minutes before a jury was to render a verdict in Locke's favor, Eastwood agreed to settle for an undisclosed amount. The outcome of the case, Locke said, sent a "loud and clear" message to Hollywood "that people cannot get away with whatever they want to just because they're powerful." The case is used in some modern law school contracts textbooks to illustrate the legal concept of good faith.

At the time of the victory, Locke had a separate pending action against Warner Bros. for allegedly harming her career by agreeing to the sham movie-directing deal that Eastwood had purportedly engineered. As had been the case with the previous lawsuit, this ended in an out-of-court settlement, in 1999.

Locke was a breast cancer survivor, having undergone a double mastectomy and chemotherapy in 1990. She had a long-term relationship with one of the surgeons who treated her.

Agent Kermit D. Fonz added this to a list 2 months ago
Gone, but not forgotten (1496 person items)

SomeBloke voted for an image 2 months, 1 week ago

chuckbb voted for an image 1 year, 5 months ago

Mass. Patriot voted for an image 2 years, 6 months ago

Kandi voted for an image 2 years, 9 months ago

Kendraatje voted for an image 2 years, 10 months ago

ercer added this to a list 3 years, 8 months ago
Rest in Peace (437 person items)

MacGuffin voted for an image 3 years, 8 months ago

milica added this to a list 5 years, 3 months ago

" Margaret 'Mick' Kelly, The Heart Is a Lonely Hunter "

FLAVIUS voted for an image 6 years, 3 months ago