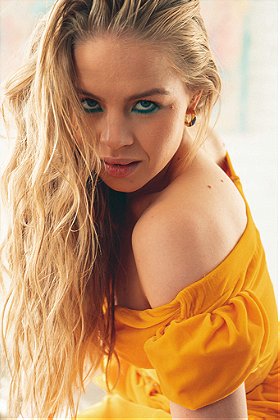 She was nominated for a Syfyportal Genre Award as best young actor/actress for her role in Medium, lost the award to Harry Potter's Daniel Radcliffe.

Discovered at the IMTA in New York in 2000, where she won 7 awards including the title of Child Actress and first runner-up Child Model Of The Year.

When she was 3, she started speaking French and reading in Russian and English, being fluent in these three languages, she now enjoys studying Spanish and American Sign Language.

Started taking ballet at 3, gymnastics at 5, playing piano at 7, riding horses at 10, and recently became fascinated by yoga.

At the age of 13, her favorite singer was Shakira, and later Sia Furler.

Sofia's Maltese "Mefodi" appears as the dog in the hands of a Plaza girl in Eloise at Christmastime (2003) (TV).

By 14, she has already visited Italy, Austria, France, Canada, England, Japan, Spain, and Russia including Siberia.

Before moving to Los Angeles at 11, she lived in Minnesota, Oregon, Arizona and Utah.

She skipped one grade in Elementary School in 1999, before her success and winning the Child Actress award on IMTA 2000, i.e. before her real interest in acting began.

Accepted the part of Kate in La decisión de Anne (2009) after Dakota Fanning stepped down, upon refusing to shave her head for the part - according to rumors.

Was offered the part of Claire in The Clique (2008) (V), but bowed out due to scheduling conflicts.

In 2009 became an honorary ambassador for Stand Up to Cancer.

Is of Russian descent.

At 17 became a student of Columbia University in New York City (2010).

teetop voted for an image 3 months, 3 weeks ago

teetop voted for an image 4 months ago

django123 voted for an image 1 year ago

Smiler1 voted for an image 1 year, 2 months ago

Peco added this to a list 1 year, 4 months ago
Estadounidenses (614 beauty items)

Avid Admirer added this to a list 2 years, 1 month ago
Most Beautiful Women in the World...Today! (1755 beauty items)

compcua posted a image 3 years ago

MUZE voted for an image 3 years, 1 month ago

Zero11 voted for an image 3 years, 2 months ago

compcua added this to a list 4 years ago
Who's the best Rapunzel ? (98 person items)

Dynasti voted for an image 4 years ago

Kitt voted for an image 4 years, 8 months ago

EatMorePez posted a image 5 years ago