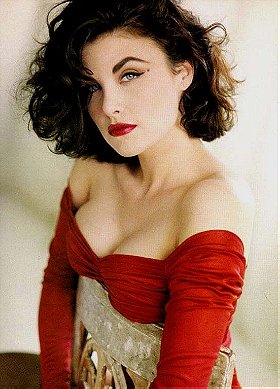 Fenn was born Sheryl Ann Fenn in Detroit, Michigan. She comes from a family of musicians: her mother is keyboard player Arlene Quatro, her aunt is singer Suzi Quatro, her grandfather Art Quatro was a jazz musician, and her father, Leo Fenn, managed such rock bands as Suzi Quatro's The Pleasure Seekers, Alice Cooper, and The Billion Dollar Babies. Fenn is of Italian and Hungarian descent on her mother's side and of Irish and French descent on her father's. She was raised Catholic. Fenn frequently traveled with her mother and two older brothers before the family settled in Los Angeles when she was 17. She did not want to start with a new school again, and soon enrolled at the Lee Strasberg Theatre Institute.

Fenn won her most famous role and made an impression on the public when she was cast by David Lynch and Mark Frost as the tantalizing, reckless Audrey Horne, a high school femme fatale, in the critically acclaimed TV series Twin Peaks. The series ran from 1990 to 1991, and the character of Audrey was one of the most popular with fans, in particular for her unrequited love for FBI Special Agent Dale Cooper (played by Kyle MacLachlan) and her style from the 1950s (with her saddle shoes, plaid skirts, and tight sweaters). Fenn reached cult status with a scene in which she danced to Angelo Badalamenti's music and a scene in which she knotted a cherry stem in her mouth. "With Sherilyn Fenn, Twin Peaks came on and effortlessly destroyed every other show’s sexuality", said co-star James Marshall. "Audrey is a woman-child who dresses like the girls in the '50s and shows her body", said Fenn. "But she's daddy's little girl at the same time." In the show's second season, when the idea of pairing Audrey with Cooper was abandoned, Audrey was paired with other characters like Bobby Briggs (played by Dana Ashbrook) and John Justice Wheeler (Billy Zane). About Audrey, Fenn said:
“ Audrey’s been great for me. She has brought out a side of me that’s more mischievous and fun that I had suppressed, trying to be an adult. She has made it OK to use the power one has as a woman to be manipulative at times, to be precocious. She goes after what she wants vehemently and she takes it. I think that’s really admirable. I love that about her.”
Shortly after shooting the Twin Peaks' pilot episode, David Lynch gave her a small part in Wild at Heart, as a girl injured in a car wreck, obsessed by the contents of her purse, opposite Nicolas Cage and Laura Dern. The film won the Golden Palm Award at the 1990 Cannes Film Festival. "David’s direction was, ‘Only think of this: bobby pins, lipstick, wallet, comb, that’s it.’ It’s very abstract." "I just pictured her being able to do this", said Lynch of her scene, "she’s like a broken China doll." David Lynch, who once described Sherilyn Fenn as "five feet of heaven in a ponytail" (quoting from a 1958 record by The Playmates), said about her:
“ She's a mysterious girl and I think that actresses like her who have a mystery – where there's something hiding beneath the surface – are the really interesting ones. ”
"He's very creative and unafraid of taking chances," she said of the director. "I really respect him. He's wonderful."
She soon portrayed John Dillinger's girlfriend Billie Frechette in ABC's 1991 gangster TV movie Dillinger opposite Mark Harmon, and shot the neo-noir black comedy Desire and Hell at Sunset Motel in which she played a sultry, seductive femme fatale. After Twin Peaks, Fenn chose to focus on widening her range of roles and was determined to avoid typecasting. She stated, "They’ve offered me every variation on Audrey Horne, none of which were as good or as much fun." She turned down the Audrey Horne spinoff series that was offered to her, and unlike most of the cast, chose not to return for the 1992 prequel movie Twin Peaks: Fire Walk with Me, as she was then shooting Of Mice and Men. ... (more) (less)
Tags: Actress (21), American (12), Brunette (10), Born 1965 (6), Twin Peaks (5), Female (5), Beautiful (5), Playboy (3), Beauty Spot (2), Lovely Eyes (2), Cute (2), Audrey Horne (2), Eyebrows (2), Gorgeous (2), Goddess (2), 1965 (2), Curvy (2)
My tags:

psow voted for an image 1 month, 1 week ago

Henny voted for 4 images 3 months ago

argentango voted for an image 3 months ago

Nusch voted for an image 4 months ago

Minerva13 voted for an image 4 months, 1 week ago

raizen717 voted for an image 7 months, 3 weeks ago

rewster posted a image 9 months ago

rewster voted for 2 images 9 months ago

jdevon voted for an image 9 months, 1 week ago

Look Left voted for an image 9 months, 2 weeks ago

" Noteworthy roles of the 90's: Twin Peaks (1990, TV Series) | Of Mice and Men (1992, Gary Sinise) | Boxing Helena (1993, Jennifer Chambers Lynch) | Fatal Instinct (1993, Carl Reiner). The cult TV Series Twin Peaks made a star out of Sherilyn Fenn, who portrayed Audrey Horne in the series. She also starred in actor Gary Sinise's directorial debut, a film adaptation of Of Mice and Men in 1992."

Look Left voted for an image 10 months ago

donpa voted for 3 images 1 year ago

Look Left voted for an image 1 year ago

dvirgueza added this to a list 1 year, 1 month ago
Planet Hot (2083 person items)

lovedriver voted for an image 1 year, 1 month ago

Minerva13 voted for an image 1 year, 1 month ago

LRDVDR voted for an image 1 year, 1 month ago

heartinkayden voted for an image 1 year, 2 months ago

fhenyang voted for an image 1 year, 2 months ago

MUZE voted for an image 1 year, 2 months ago

franceseattle added this to a list 1 year, 2 months ago
Most Beautiful Actresses (326 person items)

parryj voted for 8 images [View All] 1 year, 2 months ago

TrekMedic added this to a list 1 year, 2 months ago
Gorgeous In The 90s (17 person items)