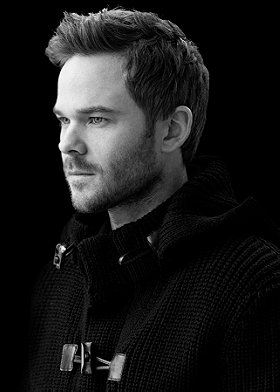 After only three months after X-Men 2 (2003) he easily earned the very minor role of his brother's double in My Brother's Keeper (2004) with a release date in spring of 2004. Apart from acting, Shawn enjoys spending time with his brother, listening to music, playing guitar and snowboarding. His special skill is that he's fluent in French. His mother Linda, who is a twin herself, is a homemaker, while his father Rick is a manufacturing manager. Shawn has one pet, Jessica, a golden retriever, that he got from his grandmother when he was nine.

Is twin brother of Aaron Ashmore.

For his made-for-television movie, Cadet Kelly (2002), he had to attend military school for 3 months, also taking voice lessons to be able to project as a cadet major.

For X-Men 2 (2003), he had to undergo physical training for 6 months with no alcohol consumption and a strict diet.

When filming Animorphs (1998) he had to pet a tiger. During one scene, the tiger jerked its head and Shawn's fingers went up its nose. Luckily, the tiger's trainer helped him escape injury.

His X-Men character, Bobby Drake/Iceman, was the first character from the comic series to make an appearance in another medium, as one of the main characters on Spider-Man and his Amazing Friends. His character, and Ray Park's character of Toad, have both appeared in animated adaptations of the comics. In both, their characters were voiced by Frank Welker.

For the 2005 TV movie Terry (2005), Shawn's prosthetic leg was digitally added in. However, for long-distance shots, Grant Darby (a leg amputee and a world triathlon champion) was used as a double.

Has the letters 'GMA' tattooed on his right wrist. The letters stand for 'Good Man Ashmore', in dedication for his grandfather. His twin brother also has the same tattoo on his left wrist.

Taught Aaron Stanford the lighter tricks he used in X-Men 2 (2003).

matt added this to a list 3 years, 2 months ago
Most beautiful men on earth 3 (200 person items)

Nikki added this to a list 4 years, 10 months ago

yreesesfreak added this to a list 5 years, 3 months ago