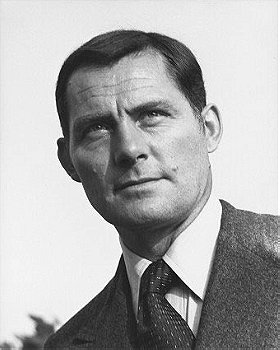 As a boy, he attended Truro and was quite an athlete, competing in rugby, squash and track events but turned down an offer for a scholarship at 17 to go to London with furthering education in Cambridge as he did not want a career in medicine but luckily for the rest of us, in acting. He was also inspired by one of the schoolmasters, Cyril Wilkes who got him to read just about everything, including all of the classics. He would take three or four of the boys to London to see plays. The first play Robert would ever see was "Hamlet" in 1944 with Sir John Gielgud at the Haymarket.

Robert went to the Royal Academy of Dramatic Arts with a £1,000 inheritance from his grandmother. He went on from the Academy, after two years (1946-1948) to Stratford-on-Avon, where he was directed by Sir John Gielgud who said to Robert Shaw, "I do admire you and think you've got a lot of ability, and I'd like to help you, but you make me so nervous." He then went on to make his professional stage debut in 1949 and tour Australia in the same year with the Old Vic. He had joined the Old Vic at the invitation of Tyrone Guthrie, who had directed him as the Duke of Suffolk in "Henry VIII" at Stratford. He played nothing but lesser Shakespearean roles, Cassio in "Othello" and Lysander in "A Midsummer Night's Dream" and toured Europe and South Africa with the company. Robert Shaw was sold on Shakespeare and thought that it would be his theatrical life at that stage. He was discovered whilst performing in "Much Ado About Nothing" in 1950 at Stratford by Sir Alec Guinness who suggested he come to London to do Hamlet with him. He then went on to his first film role, a very small part in the classic "The Lavender Hill Mob" with Sir Alec Guinness but a start nonetheless.

It was also at this time that he married his first wife, Jennifer Bourke, an actress he had met while working at the Old Vic and married her in Sallsbury, South Rhodesia on August 1, 1952. Together, they would have four daughters, Deborah, Penny, Rachel and Katherine. He would also appear briefly in "The Dam Busters" in 1954 and did the London production of "Tiger at the Gates" in June of 1955 as Topman. He would also make "Hill in Korea" around this time and then, after taking on several jobs as a struggling actor and to support his growing family, he would be cast as Dan Tempest in the series "The Buccanners" from 1956-1957. Shaw didn't take it seriously but made £10,000 for eight months work.

It was around this time that he wrote his first novel, "The Hiding Place." It was a success, selling twelve thousand copies in England and about the same in France and in the United States. He also wrote a dramatization of it that was produced on commercial television in England and "Playhouse 90" aired a different dramatization in America. Around 1959, he became involved with the well-known actress Mary Ure, who was married to the actor John Osborne at the time. He slipped her his telephone number one night at 3 a.m. while visiting the couple and she called him the next day. It was around this time, in 1960, that Robert Shaw became a reporter for England's Queen magazine and covered the Olympics in Rome. Robert Shaw and Mary Ure acted together in Middleton's The Changeling at the Royal Court Theatre in London in 1961. He was playing the part of an ugly servant in love with the mistress of the house who persuades him to murder her fiancé. Robert Shaw and Mary Ure had a child on August 31st, even though they were still married to their other spouses. His wife Jennifer and Mary Ure had children to him only weeks apart from each other. Mary divorced John Osborne and married Robert Shaw in April 1963. The couple was often quoted by the press as being, "very much in love" and together, they would have four children together; Colin, Elizabeth, Hannah and Ian.

After making the next two films, "The Valiant" and "The Caretaker", he made "From Russia with Love" and was unforgettable as the blonde assassin, Donald 'Red' Grant. He also made "Tomorrow at Ten", as well as TV version of Hamlet as Claudius. He would then film "The Luck of Ginger Coffey" with his wife Mary Ure in 1964 and then star in Battle of the Bulge as the German Panzer commander Hessler. He wrote "The Flag" on the set of Battle of the Bulge. He was nominated for his next role, as Henry VIII in "A Man for all Seasons", an outstanding, unequalled performance. He would write his fourth novel "The Man in the Glass Booth", which was later made into a play with Donald Pleasance and later into a film with Maximillian Schell. In 1967, he again starred with his wife Mary Ure in "Custer of the West", then on to "The Birthday Party" and "Battle of Britain". One of his best performances of this decade was also as the Spanish conqueror Pizarro in "The Royal Hunt of the Sun". His last published novel, "A Card from Morocco" was also a big success and he went on to make "Figures in a Landscape" in 1970 with Malcolm McDowell as two escaped convicts in a Latin American country.

As the father of Churchill in "Young Winston" he was once again his brilliant self, and stole the scene from John Mills, Patrick Magee, Tony Hopkins and Ian Holm. After his portrayal of Lord Randolph Churchill, he made "A Reflection of Fear", a horror movie with Mary Ure, Sandra Locke and Sally Kellerman. As the chauffeur Steven Ledbetter in the 1973 movie, "The Hireling" he falls in love with Sarah Miles, an aristocratic widow he helps recover from a nervous breakdown. It took the prestigious Palme d'Or at the Cannes Film Festival and was quite a thought provoking film. It was in the following films, The Sting and The Taking of Pelham One Two Three that Robert Shaw became familiar once again to American audiences but it is his portrayal as a grizzled Irish shark hunter, named Quint, in Jaws that everyone remembers, even to this day. Hard to believe that Robert Shaw wasn't that impressed with the script and even confided to a friend, Hector Elizondo, "They want me to do a movie about this big fish. I don't know if I should do it or not." When Elizondo asked why Shaw had reservations he mentioned that he'd never heard of the director and didn't like the title, "JAWS." It is also incredulous that as the biggest box office film, which was the first movie to gross more than $100 million worldwide, he had ever been part of, he didn't make a cent from it with the taxes he had to pay from working in the United States, Canada and Ireland.

It was also during this time that he became a depressed recluse following the death of his wife Mary Ure who took an accidental overdose of barbiturates and alcohol. Some have speculated throughout the years that her death was suicidal but there was no reason for it and this is mere sensationalism. Following "Diamonds" he made "Der Richter und sein Henker (The End of the Game)", then another brilliant performance in 1976 as the Sheriff of Nottingham in "Robin and Marian". During the same year, he also made "Swashbuckler" with Genevieve Bujold and James Earl Jones, a very light-hearted pirate adventure. His next film "Black Sunday" (1977), with Shaw playing an Israeli counter-terrorist agent trying to stop a terrorist organization, called Black September, which is plotting an attack at the Super Bowl, was a big success both with critics and at the box office. I wasn't surprised considering the depth that he was also involved in writing the script although he didn't receive billing for it. He was very happy with his career but remained a depressed recluse in his personal life until he finished "Black Sunday" when he found himself in love with his secretary of 15 years, Virginia Dewitt Jansen (Jay). They were wed on the 29th of July 1976 in Hamilton, Bermuda. He adopted her son Charles and the couple also had one son, Thomas.

During his stay in Bermuda, Shaw began work on his next movie, "The Deep" (1977) which teamed him and writer Peter Benchley once again and maybe that was a mistake, in that everyone expected another Jaws. At one point, discussing how bad the film was going, Shaw could be quoted as saying to Nolte, "It's a treasure picture Nick, it's a treasure picture". It did well at the box office but not with critics, although they did hail Robert Shaw as the saving grace. He had done it for the money, as he was to do with his next film, for he had decided when Mary Ure had died that life was short and that he needed to provide for his nine children.

In "Force Ten from Navarone", a sequel to the 1961 "The Guns of Navarone", he revived the lead role of the British MI6 agent Mallory originally played by Gregory Peck. He was a big box office draw and some producers were willing to pay top wages for his work, but he felt restricted by the parts he was being offered. "I have it in mind to stop making these big-budget extravaganzas, to change my pattern of life. I wanted to prove, I think, that I could be an international movie star. Now that I've done it, I see the valuelessness of it." "Avalanche Express" was Robert Shaw's last film in which he played General Marenkov, a senior Russian official who decides to defect to the west and reveals to a CIA agent, played by Lee Marvin, that the Russians are trying to develop biological weapons. An alcoholic most of his life, Robert Shaw died, before the film was completed, of a heart attack at the age of 51 on August 28, 1978. During a break in filming in Ireland, he was driving home to his cottage with his wife, Virginia, and young son, Thomas, when he felt chest pains which he claimed to her that they had started earlier that day while he was playing golf with a few of his friends at a local course. He pulled the car over a few hundred yards from his cottage and told her he would get out and walk them off. After taking four or five steps from the parked car, he collapsed by the side of the road and was pronounced dead about 15 minutes later when an ambulance team arrived. ... (more) (less)
Tags: British (3), Died 1978 (3), Born 1927 (3), Bond Villain (3), Actor (2), Veteran (2), Villain (2), Air Force (2), Military (2), Scuba Diver (2), Writers In The Military (1), Oscar Nominated Actor (1), World War II Veteran (1), DILF (1), British Military (1), Buried In Ireland (1), Daddy (1), Brilliant (1), Died Aged 51 (1), Oscar Nominated Actors In The Military (1)
My tags:

3. Paul Hindemith: When Lilacs Last in the Dooryard Bloom'd (A Requiem for Those We Love)

Agent Kermit D. Fonz added this to a list 5 months, 3 weeks ago
Gone, but not forgotten (1566 person items)

diabolical dr voodoo added this to a list 1 year, 8 months ago

"as Ivan Vanko/Whiplash It's not like he did never played a Russian character before."

Gulielmus voted for an image 2 years, 6 months ago

Kandi voted for an image 3 years ago

sasha25 added this to a list 6 years, 1 month ago
Celebrity Crematorium (25 person items)