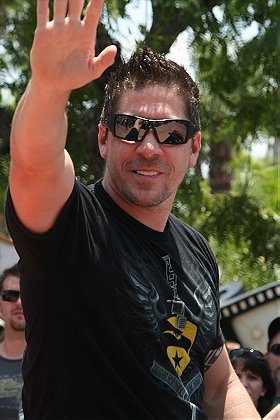 Ray began teaching himself gymnastics at a young age but felt he was missing the correct training to achieve a higher level. At age 15, he found a school that was willing to allow him to practice and use the floor space. The gymnastic training helped to improve his martial arts training and began to sit in and take seminars in coaching gymnastics. It was when he was 19, he relocated to another gymnastic gym and became one of the boys squad coaches and further went on to be in charge of coaching recreational gymnastics throughout schools in London. Ray's boys squad won 1st in The London Youth Games for Hendon Gymnastics Club. It was during one of his frequent visits to Malaysia that he was approached to audition for Mortal Kombat: Annihilation (1997). Ray became martial arts advisor to one of the stunt coordinator's and later landed playing one of the Reptiles, Baraka and doubling for Rayden. ... (more) (less)
Tags: Actor (5), Scottish (4), Stuntman (4), British (3), Darth Maul (3), Martial Artist (3), Star Wars (2), Male (1), Snake Eyes (1), Stunt Man (1), Born In 1974 (1), Suntman (1)
My tags:

1. Sleepy Hollow: Behind the Legend

Monstermaster added this to a list 3 years, 2 months ago