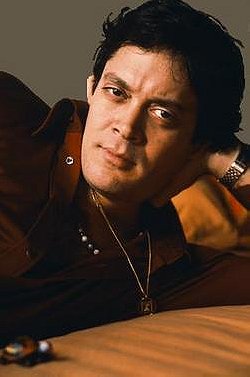 After smallish roles in Panic in Needle Park (1971), The Organization (1971), The Eyes of Laura Mars (1978), and a two-year run on the children's TV classic Sesame Street (1971-73), Julia accepted the invitation from Francis Ford Coppola's Zoetrope Films to appear in two films. In 1982, Julia appeared in One from the Heart, co-starring Terri Garr and Nastasia Kinski, directed by Coppola, and in The Escape Artist produced by Coppola and directed by acclaimed cinematographer Caleb Deschanel.

But his breakout film performance was in Kiss of the Spider Woman -- playing the political dissident Valentin, at first suspicious of his flamboyant cellmate and wholeheartedly committed to his left-wing cause. His poignant portrayal of Valentin won Julia the National Board of Review Award for Best Actor (for which he was tied with William Hurt), as well as a Golden Globe Nomination.

After Kiss of the Spider Woman, he played supporting roles in a number of films with A-list cast including Sidney Lumet's The Morning After (1986), starring with Jane Fonda and Jeff Bridges, and Tequila Sunrise (1988), the Kurt Russell/Mel Gibson/Michelle Pfeiffer romantic thriller. That same year he again appeared opposite Sonia Braga in the comic Moon over Parador (1988), directed by Paul Mazursky, and in 1989 he played Archbishop Oscar Romero in John Duigan's Romero.

In 1990 Julia appeared opposite Harrison Ford in Alan J. Pakula's Presumed Innocent as the brilliant defense attorney Sandy Stern, and as Victor Frankenstein in Roger Corman's Frankenstein Unbound. In 1990 he joined his former co-star Sonia Braga in The Rookie, along with Charlie Sheen and Clint Eastwood. His most widely recognized role came in 1991 in the big screen translation of Charles Addams' The Addams Family, an obvious match for Julia's wacky comic flare. He and Anjelica Huston revisited their roles as Gomez and Morticia in the sequel Addams Family Values (1993).

Raul Julia was born Raul Rafael Carlos Julia y Arcelay in San Juan, Puerto Rico on March 9, 1940. He studied theatre at The University of Puerto Rico in San Juan before moving to New York City in 1964 at the age of 24.

One of Julia's most memorable roles was as Brazilian environmentalist and trade unionist Chico Mendes in the made-for-cable film The Burning Season (1994). In October 1994, Julia suffered a severe stroke and slipped into a coma. Raul Julia died on October 24 -- just days before the completion of his final film, Street Fighter.

1. Kiss of the Spider Woman

2. Raul Julia: The World's a Stage

1. Down Came a Blackbird

3. Onassis: The Richest Man in the World

4. The Alamo: Thirteen Days to Glory

Agent Kermit D. Fonz added this to a list 7 months, 3 weeks ago
Gone, but not forgotten (1619 person items)

Dagobert added this to a list 1 year, 2 months ago

Kendraatje voted for an image 2 years, 7 months ago

Kendraatje voted for an image 2 years, 11 months ago

Kendraatje voted for an image 3 years, 1 month ago

moviebuff added this to a list 4 years, 2 months ago
MovieBuff's Top 15 Celebrities We Miss (15 person items)

lalabellexoxo added this to a list 5 years, 1 month ago
My Hottest Men In Entertainment List 2016 (373 person items)

Oliver voted for an image 5 years, 2 months ago

Leo added this to a list 6 years, 11 months ago
Top 10 Actors Who Have Never Been Nominated for an (10 person items)