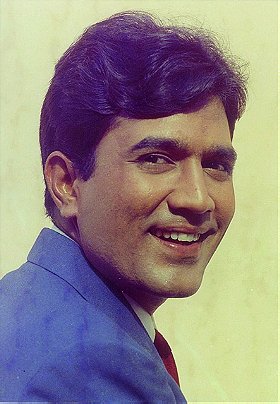 Anju Mahendru was his girl friend in 1966-1972, the then aspiring actress but they had breakup in 1972 when Anju was not ready for marriage and Khanna married his fan Dimple Kapadia in March 1973, 8 months before Raj Kapoor's Bobby released in theaters.

Khanna's pairing with Mumtaz always produced much success as they had all of their eight films together as major golden jubilee hits.His films with Sharmila Tagore, Asha Parekh and Zeenat Aman was a favorite with audiences too in 70's.

From 1976 onwards till 1978, his films started flopping unexpectedly although his performances and the film's music were praised by critics and thereby his successful run at the box office ended.

Khanna bounced back with Amardeep and then again started giving many critically acclaimed and commercially successful films starting from 1979 till 1991.K.Balaji , Tamil film actor and producer, wanted to establish himself in Hindi film industry as a producer and thereby wanted to remake his Tamil film Dheepam, which had starred Sivaji Ganeshan in the lead role, in Hindi. At a time when Khanna's films were not working at the box office, Khanna got this film out of the blue and went on to become a big hit.In the 80's his films opposite Tina Munim, Hema Malini, Shabana Azmi, Smita Patil and Poonam Dhillon were big hits.

He produced three films and co-produced 3 films. He left film industry in 1991 and entered politics by joining the Congress Party in 1991 and became a member of parliament. Khanna was awarded Filmfare Special award in 1991 for having starred in 101 films as the solo lead hero and just 21 two hero films in short span of 25 years. He is still adored and fondly remembered by the masses. Songs from his films adorn the lips of youth and adolescents. He was the first mega-star and has left behind a storehouse of the finest moments in film history

Mini Biography
Jatin Khanna, the first superstar of Indian and Hindi Cinema, was born on 29 December 1942 in Amritsar, Punjab, India. He was adopted by relatives of his biological parents.

When Jatin took an interest in acting, his rich foster father disapproved, however, Jatin persisted and won the Filmfare Talent Contest in the early 1960s.His uncle advised him to replace his first name from Jatin to Rajesh while entering in film line.

He made his debut in the off-beat 'Aakhri Khat' opposite Indrani Mukherjee, thus was born Rajesh Khanna.

After dating for seven years with his girlfriend-costume designer, Anju Mahendru, Khanna broke up with her and got married to Dimple Kapadia in 1973. Subsequently he became the father of Twinkle, born in 1974 on the same date as he himself, who would later become actress in her own right. His second child, also a daughter, Rinke, was born on 29 June 1977, and also became an actress.

Rajesh was the sole Superstar of Indian and Hindi Cinema from 1969-1976 but had a bad phase from 1976-78 and so has to share Superstar of Hindi Films status with Amitabh from 1977-1991. Khanna acted as the main lead hero from 1966 to 1991 till he the time he joined politics in 1991.In the period 1976-78 Khanna continued to act in many critically acclaimed movies but they failed at box office as violent movies, along with multi star films became popular. Khanna tasted success at box office again from 1979 till 1991. His married life came to an end with Dimple separating from Khanna in 1984. The same time, due to being constantly paired up opposite Khanna, Tina Munim fell in love with Khanna. Tina and Khanna were the top most romantic pair in the eighties. Tina decided to discontinue her film career in 1987 and thereby even their relation ended.Then again relation between Dimple and Khanna blossomed and they even did a film together Jai Shiv Shankar.

Rajesh decided to join politics in early nineties and was elected Member of Parliament for a 5 year term from 1991 through to 1996 representing New Delhi as his constituency. He also starred in 3 movies during this period. He does continue to appear on the tinsel screen as the central character in few films post 1998.

Rajesh played the main lead in two serials 'Ittefaque' and 'Apne Paraye' on television during 2001-02 and in Raghukul Reet Sada Chali Aayi in 2008-09.