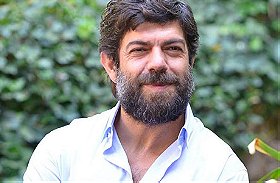 A native of Rome, Italy, he graduated from the Silvio d'Amico National Drama Academy before honing his craft at the Teatro di Roma under the direction of Luca Ronconi. Favino started his career in the theatre (directed by such renowned Italian artists as Ronconi and Gigi Proietti) before making his film debut in the 1995 boxing drama Pugili, directed by Lino Capolicchio.

Laurence3 voted for an image 4 years ago