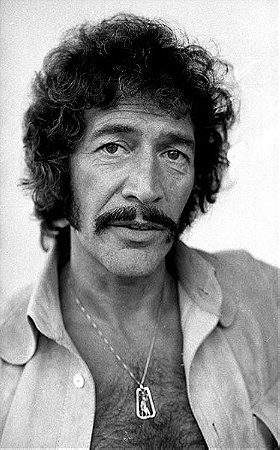 He was born Cyril Goldbert in Marseille, France, the son of an English father and a French mother. His father worked for the British Diplomatic Service, and as a result his childhood was spent in a number of different countries. In 1941, while his parents were away in India, he went to stay with a Swiss family in Shanghai. The Japanese Army took over Shanghai's International Settlement on 8 December 1941, and as a British citizen Goldbert was interned in the Lunghua civilian internment camp on 10 April 1943. Conditions in the camp were sometimes harsh. According to J. G. Ballard's autobiography Miracles of Life, "Cyril Goldbert, the future Peter Wyngarde" was a fellow internee at Lunghua Camp and "He was four years older than me...". Ballard was born in November 1930 but according to Lunghwa Camp records compiled in 1943, Goldbert was actually born in 1928. His younger siblings, Adolphe Henry and Marion Simeone, were under Swiss protection and thus exempt from internment.

As a young man he went into acting and from the mid-1950s had various acting roles in feature films, television plays and television series guest appearances. One of these, a television adaptation of Julien Green's novel South (1959, originally Sud), in which Wyngarde featured in a lead role, is thought to be earliest television play with an overtly homosexual theme. In 1960 he played a lead role in the film The Siege of Sydney Street and appeared as Sir Roger Casement in an episode in the Granada TV's On Trial series produced by Peter Wildeblood. Wyngarde's film work was limited but had impact. In Jack Clayton's The Innocents (1961), he had brief (unspeaking) scenes as the leering Peter Quint with Deborah Kerr and Pamela Franklin. The following year he was the lead actor in the occult thriller Night of the Eagle.

By the late 1960s, he was a regular guest star on many of the popular UK series of the day — many of which were espionage adventure series — including The Avengers, The Saint, The Baron, Sherlock Holmes, The Champions, The Troubleshooters, Love Story, I Spy and The Man In Room 17. He also played the authority figure Number Two in The Prisoner ("Checkmate", 1967).

Wyngarde became a British household name through his starring role in the espionage series Department S (1969). His Jason King character often got the girl and as she is about to kiss him, he manages to avoid it, much to the annoyance of co-actor Joel Fabiani. After that series ended, his character, the suave womaniser Jason King, was spun off into a new action espionage series entitled Jason King (1971), which ran for one season (26 one-hour episodes). The quirky series was sold overseas and Wyngarde briefly became an international celebrity, being mobbed by female fans in Australia. A revival in October 1973 of The King and I, featuring Wyngarde in the male lead role, and initially with Sally Ann Howes as Anna, ran for 260 performances at the Adelphi Theatre in London. ... (more) (less)
Tags: Died 2018 (2), British (1), English (1), French (1), Actor (1), Deceased (1), Born 1927 (1), Died Aged 90 (1), French Born (1), Disputed Birthdate (1), ITC (1), Department S (1), Jason King (1)
My tags:

SwtChaos added this to a list 4 years, 12 months ago

Onion Jack added this to a list 6 years, 10 months ago