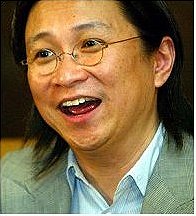 His films have been shown in festivals from London to Tokyo and have won a number of international awards. Comrades: Almost a Love Story, won nine Hong Kong Film Awards, including Best Film and Best Director. Two of Chan's other films, Tom, Dick and Hairy and He's a Woman, She's a Man, won Best Picture and Best Director awards from the Hong Kong Directors Guild. His other films include He Ain't Heavy, He's My Father and Who's the Woman, Who's the Man.

Born in Hong Kong, Chan was raised in the Chinese community in Bangkok. He later attended college in the United States before returning to Hong Kong to work as an assistant director. He served as the second assistant director on John Woo's Heroes Shed No Tears, before making his directorial debut with Alan and Eric: Between Hello and Goodbye in 1990. He co-founded the United Filmmakers Organization in 1992 to also produce films.

Now based in Los Angeles, Chan makes his American directing debut with The Love Letter. ... (more) (less)
My tags: