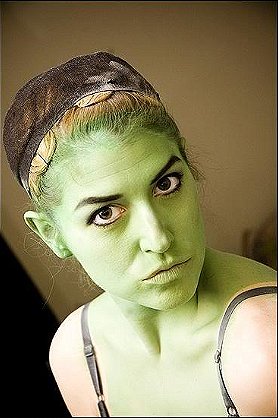 Parker joined the cast of MADtv in 2003 as a featured performer for the ninth season. She was promoted to cast member status the following season. Parker's most noteworthy characters include Inside Looking Out host Pat-Beth LaMontrose and the carefree yet naive Disney Girl. She has a long celebrity impressionist list, often imitating pop-music stars in parody music videos. Parker left the show on the first week of November 2008, but appeared in pretaped sketches until MADtv's series finale in 2009.

In 2004 Parker was Nominated for Jeff Award nomination for Best Actress in a Principal Role: Musical, for her performance in The People vs. Friar Laurence, The Man Who Killed Romeo and Juliet. From July 2006 to January 2007, Parker performed in Martin Short: Fame Becomes Me comedy musical. In 2009 Parker played the role of Elphaba in the Broadway production of the musical Wicked, for a six month run, from January 16 through July 19. ... (more) (less)
Tags: Comedian (1), Comedienne (1), Born 1978 (1), MadTV (1), Funny Bone (1)
My tags:

4. Kathy Griffin: My Life on the D-List

TrekMedic voted for an image 2 years ago