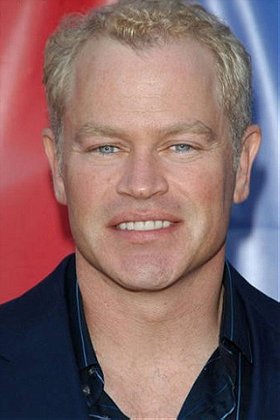 In 1991, McDonough won the Best Actor Dramalogue for "Away Alone". McDonough has made many television and film appearances since then, including Band of Brothers, Boomtown, Star Trek: First Contact, Minority Report and The Hitcher. McDonough played Dave Williams on the fifth season of Desperate Housewives. He also starred in the lead role on 2004 medical drama Medical Investigation for its one full season.
McDonough was set to star in the ABC dramedy Scoundrels[3] but was fired for refusing to do sex scenes for the show. He credits his family and his Catholic faith for his decision.
McDonough portrays the role of "Jesus" in "The Truth & Life Dramatized audio New Testament Bible," a 22-hour, celebrity-voiced, fully dramatized audio New Testament which uses the Catholic edition of the RSV.
In 2012 McDonough had a recurring role in the third season of FX's Justified as Robert Quarles, a Detroit gangster with a troubled past. He was cast as Police Chief Parker in Frank Darabont's TNT pilot L.A. Noir.
McDonough was born in Dorchester, Massachusetts, the son of Catherine (née Bushe) and Frank McDonough, motel owners who emigrated from Ireland, with his mother coming from County Tipperary and his father from County Galway. McDonough was raised Roman Catholic. He grew up in Barnstable, Massachusetts, graduated from Barnstable High School, and attended Syracuse University, where he was a member of the Sigma Chi Fraternity and graduated with a Bachelor of Fine Arts degree in 1988. His roommate in college was Brett Pollock, current broadcaster for the Omaha Storm Chasers of the Pacific Coast League. McDonough frequently appeared as "Captain Laser", inspiring young students to bring their studies to completion. From there, McDonough trained for a short time at the London Academy of Music and Dramatic Art (LAMDA).
McDonough is married to Ruvé Robertson, with whom he has a son, Morgan "Little Buck"[9] Patrick (born November 2005), and three daughters, Catherine Maggie (born May 14, 2007), London Jane (born January 11, 2010), and Clover Elizabeth (born August 15, 2011 ... (more) (less)
Tags: Star Trek (7), Male (7), Actor (7), Born 1966 (5), Drama (4), Action (4), Movies (3), American (3), Blonde (3), Desperate Housewives (3), Cool (2), Hot (2), Pretty (2), T.v. (2), Fabulous (2), Love Him (2), Handsome (2), Lovely (2), Incredible (2), Deserves An Oscar (2)
My tags:

5. What If... Captain Carter Were the First Avenger?
View all Neal McDonough movies (40 more)

cekadidas added this to a list 2 years, 3 months ago
Favorite Celebrities (Dead or Alive) (764 person items)

diabolical dr voodoo added this to a list 6 years, 2 months ago
The People on the MCU (175 person items)

Leo added this to a list 6 years, 8 months ago
Directed by Richard Donner (106 person items)