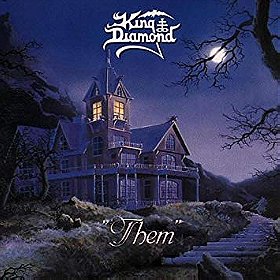 View all Them pictures

It is the first of two fictional concept albums about King and his mentally ill grandmother, the second of these being Conspiracy. King falls into a harrowing descent into madness via his grandmother and the voices in the House of Amon, known to the listener only as "Them". This album has sold over 200,000 copies in North America alone.
Manufacturer: Roadrunner Records
Release date: 13 September 1988
Number of discs: 1
EAN: 0016861878528 UPC: 016861878528
Tags: Heavy Metal (1), 1988 (1), King Diamond (1)
My tags:

Darth Brutus added this to a list 9 months, 4 weeks ago

"Them is up there with Abigail, if not at times even better. The weak production and thin guitar sound plague this album like crazy, but the songwriting and the performance is just as great as ever."

CD Smiles added this to a list 1 year, 8 months ago