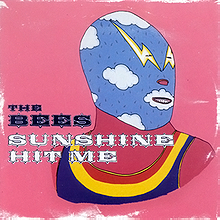 View all Sunshine Hit Me pictures

The album is very eclectic and summery, with a range of influences, including psychedelia, Jamaican dub, reggae, indie, 60's rock and others. As a result it is very difficult to describe, and perhaps a somewhat surprising choice for a cult album. However its infectious grooves, and laid-back summer sounds propelled it to the front of the British music scene, even earning it a Mercury Music Prize nomination. The main single "A Minha Menina" was used in a Citroën car advertisement, which also helped the band to get noticed. The track was also used in an advert for Magners Irish Cider in December 2008.

The band followed up the album by several tours, which resulted in the band expanding into the current lineup in order to play the material live. However, all the members had played with Butler before on the island, whether in his other projects or simply in informal jams (interestingly, whilst Butler and Fletcher produced and performed the album themselves, the entire six-piece is credited on the back sleeve). After the huge success of the album, the band signed to Virgin, who released the follow up Free The Bees in 2004. ... (more) (less)
Manufacturer: Astralwerks
Release date: 25 March 2002
EAN: 0724354223624 UPC: 724354223624
My tags: