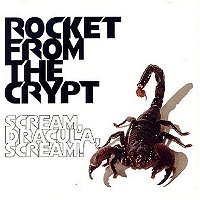 Rocket From The Crypt

The album also made the band an alternative rock hit in the US, where their videos were featured on MTV and the album received many positive reviews in both mainstream and underground music presses. A large headlining tour in support of the album ensued in 1996, as well as supporting tours with Rancid and Soundgarden. During these tours the band gained a reputation for a series of interesting and, at times, seemingly ludicrous gimmicks and stage antics which included holding raffles during live performances, spinning a large game show wheel to determine set lists, onstage fire breathing, annual Halloween and New Year's shows, and the wearing of coordinated and progressively more ornate stage costumes. In Europe the band also hosted a German variety show, played children's shows and morning shows, and did interviews with fashion magazines. While unorthodox, these antics increased the band's reputation as an energetic live act and helped to increased album sales.

Phibes added this to owned list 2 years, 5 months ago