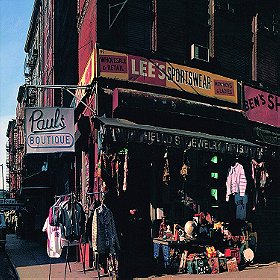 Paul's Boutique was initially considered a commercial failure by the executives at Capitol Records, as its sales did not match that of the group's previous record, Licensed to Ill, and the label eventually decided to stop promoting the album. The album's popularity continued to grow, however, and it has even been touted as a breakthrough achievement for the Beastie Boys. Highly varied lyrically and sonically, Paul's Boutique secured the Beastie Boys' place as critical favorites in the hip-hop genre, and has been widely recognized as the group's magnum opus.[unreliable source?] The album's rankings near the top of many publications' "best albums" lists in disparate genres has given Paul's Boutique critical recognition as a landmark album in hip hop.

rollcallaction added this to a list 1 year, 6 months ago
The 500 Greatest Hiphop/Rap Albums (213 music items)

Stehako added this to a list 2 years, 11 months ago

CD Smiles added this to a list 4 years ago

JxSxPx added this to a list 4 years, 7 months ago

JxSxPx added this to a list 5 years, 1 month ago

"No one bought it at the time, but the Beasties’ second CD, Paul’s Boutique, has since been hailed as their magnum opus. After the thuggish simplicity of Licensed to Ill, it’s no wonder the follow-up’s ingenious bouillabaisse of funk, rock and speed-shouting threw a few. Standout track: “Hey Ladies”"

Ueno_Station54 added this to a list 5 years, 5 months ago