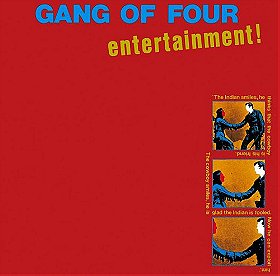 37 votes
My 600 Favorite Albums Of All Time (600 items)
list by Pandoras Folly
Published 9 years, 4 months ago

The music on the first album shows clearly the influence of punk, yet also incorporates funk and less-obvious influences of reggae and dub, similar to other bands at the time such as Public Image Ltd., Pere Ubu, and The Pop Group. As with these other influential post-punk bands, the bass is mixed much more prominently than it typically is in rock or punk (However is still very silent compared to other Gang Of Four Releases).

The album has attracted praise from rock musicians. Flea of the Red Hot Chili Peppers stated that the first time he heard the record, "It completely changed the way I looked at rock music and sent me on my trip as a bass player." In 2003, the album was ranked number 490 on Rolling Stone magazine's list of the 500 greatest albums of all time. In March 2005, Q magazine placed the track "At Home He's a Tourist" at number 52 in its list of the 100 Greatest Guitar Tracks.

In 2005, the band performed the album live in its entirety as part of the All Tomorrow's Parties-curated Don't Look Back series.

JxSxPx added this to a list 2 weeks, 5 days ago
RollingStone's The 500 Greatest Albums of All Time (500 music items)

Bruno II added this to wanted list 2 months ago

Diabolik added this to owned list 1 year, 6 months ago

sdepy83 added this to a list 3 years, 5 months ago

JxSxPx added this to a list 4 years, 10 months ago

"Fusing James Brown and early hip-hop with the bullet-point minimalism of the Ramones, Gang of Four were a genuine revolutionary force in their pursuit of working-class justice. The Leeds foursome bound their Marxist critique in tightly wound knots of enraged funk and avenging-disco syncopation, slashed by guitarist Andy Gill's blues-free swordplay."

JxSxPx added this to a list 5 years, 3 months ago
Uncut Magazine - 200 Greatest Albums Of All Time (200 music items)

JxSxPx added this to a list 5 years, 5 months ago

"Throwing down the post-punk gauntlet, Gang of Four’s debut is a powder keg full of paradoxes: Chilly vocals and jagged shards of guitar keep you at a shivering distance, while Marxist lyrics and a deep-groovin’ rhythm section provoke both action and reaction. Standout track: “Anthrax”"

Director Black added this to wanted list 6 years, 5 months ago

rolliefingaz added this to owned list 6 years, 6 months ago