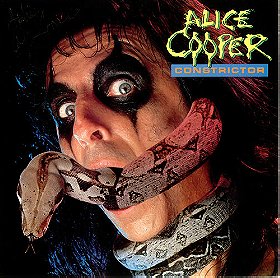 The album returned Cooper to the charts at number 59 after his previous two releases Zipper Catches Skin and DaDa had failed to crack the Top 200. For all intents and purposes, Constrictor was the first "normal" album Cooper had released in nearly eight years, since his records following From the Inside were seen as largely experimental.

The horror series Friday the 13th teamed up with Cooper during this time to produce the theme song for its latest film. The song “He's Back (The Man Behind the Mask)” was written for Friday the 13th Part VI: Jason Lives and went on to become a #1 hit in Sweden. Also featured in the film were Constrictor’s “Teenage Frankenstein” and “Hard Rock Summer,” which did not end up on the album.

The track “The Great American Success Story” was apparently intended as the theme song to the Rodney Dangerfield film Back to School, but was not actually used.

" "He's Back (The Man Behind the Mask)" Runner up: "Teenage Frankenstein""