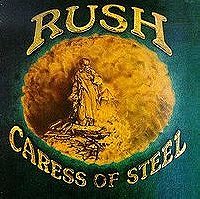 View all Caress of Steel pictures

Intended to be Rush's breakthrough album, it sold fewer copies than their previous record and was considered a disappointment by their record company. The subsequent tour became known by the band as the "Down the Tubes" tour, as they feared the album's poor sales, which led to sparse crowds at the shows, might mean the end of their career.

The album was certified Gold by the RIAA in 1993. The next year's follow-up album, 2112 would pave the way for Rush's commercial success with its own 21-minute epic.

Originally, the album cover was supposed to be in silver hue to give it a "steel" appearance. A printing error resulted in a copper color for the album cover.

CD Smiles added this to a list 1 year, 3 months ago