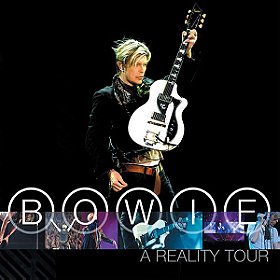 View all A Reality Tour pictures

Caught at the very apex of his storied career, fronting a crack band that spotlights guitarist Earl Slick, Bowie cuts loose with "Fame" (co-written with John Lennon); a thrilling audience sing-along version of "All The Young Dudes" (a huge hit Bowie penned for Mott The Hoople); "Under Pressure" (co-written by Bowie and members of Queen, including Freddie Mercury); and "Changes," the Bowie song that all but defines the man's career in a single word. With few exceptions, no other singer in the history of pop music has been around for this long and sounds as exciting now as he ever did!

Kouryu added this to owned list 5 years, 4 months ago