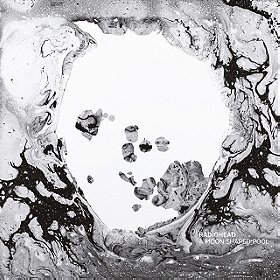 Radiohead recorded A Moon Shaped Pool in southern France with longtime producer Nigel Godrich. It includes several songs written some years earlier; "True Love Waits" dates to at least 1995, "Burn the Witch" to 2000 and "Present Tense" to 2008. The album features strings and choral vocals arranged by Radiohead guitarist Jonny Greenwood and performed by the London Contemporary Orchestra. "Ful Stop" features additional drumming from Clive Deamer, who performed with Radiohead on their 2012 King of Limbs tour. The artwork was created by singer Thom Yorke with longtime Radiohead collaborator Stanley Donwood, who created abstract works by leaving the canvases outside and allowing the weather to affect the paint.

Radiohead promoted A Moon Shaped Pool a week before its release with the singles "Burn the Witch" and "Daydreaming", accompanied by music videos. The band also commissioned a series of video vignettes set to short clips from the album. A world tour began in May 2016 and resumed in March 2017, with headline performances at festivals including Glastonbury and Coachella.

A Moon Shaped Pool was acclaimed by critics and appeared in many publications' lists of the year's best albums. It was the fifth Radiohead album to be nominated for the Mercury Prize, and was nominated for Best Alternative Music Album and Best Rock Song (for "Burn the Witch") at the 59th Annual Grammy Awards. It topped the charts in several countries, becoming Radiohead's sixth number-one album in the UK and a bestseller on vinyl. It was certified gold in the UK on 24 June 2016. ... (more) (less)
Manufacturer: XL
Release date: 8 May 2016
Tags: Electronic (1), Art Rock (1), Radiohead (1), 2016 (1)
My tags:

karmapolice rated this 8/10 6 months ago

MOTORMAN rated this 7/10 8 months ago

morpheuslain rated this 8/10 9 months ago

JulienDankBoy rated this 8/10 3 years, 2 months ago

randyjeffries rated this 9/10 3 years, 3 months ago

Léon added this to wanted list 3 years, 6 months ago

Gumtierl added this to wanted list 4 years, 4 months ago

mcfly added this to a list 4 years, 4 months ago
Música (22 music items)

rollcallaction rated this 5/10 4 years, 9 months ago