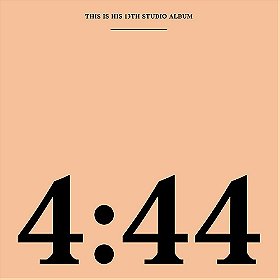 "Smile" was named "Best New Track" by Pitchfork, with editor Marc Hogan commenting, "JAY-Z is near peak form as a rapper. There are sneaky internal rhymes ("Everybody wave bye to the guy you thought you could lie to") as he rips into people who'll rip the album from Tidal, casting his own business success within the black American struggle. In a classy move that's also a tearjerker, the final word goes to his mom."[27]

Brittany Spanos of Rolling Stone calls the album, "a stunning, raw and mature apology that's as much an ode to partnership and family as it is an example of how vulnerability can make for truly excellent art." Spanos states "4:44" is "the most specific and touching" song on the album.[28]
Track listing

Dj Levels added this to a list 3 years, 1 month ago
Music...Discography of...Jayz and Ranking (16 music items)

kathy voted for an image 3 years, 4 months ago