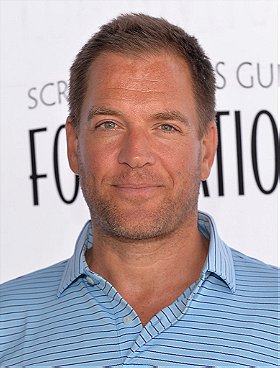 Has one son, August Manning, born in 1996, with ex-wife Amelia Heinle.

Son of Michael Manning Weatherly, Sr., who made millions as the American importer of the Swiss Army Knife, and Patricia, a hospital administrator.

Was engaged to "Dark Angel" (2000) co-star Jessica Alba. In a 2008 interview with Elle Magazine, Alba called Weatherly her "first love" and heavily hinted that she lost her virginity to him.

Played in a band to supplement his acting in the early days of his career. He plays guitar and piano. He also sold shoes, delivered pizzas, dabbled in songwriting and also worked in the videotape library of ABC. A big part of his job there was to log and cart around one-inch reels of videotape.

Attended the TV Week Logies on May 6, 2007 as an international guest for Channel 10. The Logies were held in the Crown Casino Complex in Melbourne, Australia. Michael was accompanied by his niece, Alexandra Breckenridge .

Took his mom to see Borat.

When "NCIS" (2003), in which he stars, wanted to release a soundtrack, they invited him to record a song. He recorded "Bitter and Blue". The success of the song led to Michael recording several more songs, including "Pretty Baby", "All Fall Apart", "Lovlihead", and "Suffer for Me".

Michael and his wife Bojana have a pet German Shepherd named Oriana.

His comedic influences, when he was young, were Steve Martin, Robin Williams, David Letterman and Bill Murray.

Has a German Shepard called Quantum.

On January 13, 2012, Michael Weatherly announced he and his wife, Bojana Jankovic, are expecting a baby girl in the spring.

flover posted a image 1 month ago

kathy voted for an image 4 years, 9 months ago

IsabellaSilentRose added this to a list 5 years, 10 months ago