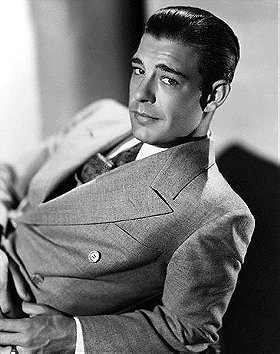 Hoping to convince producers that he was a fine actor in his own right, Chaney appeared as the mentally retarded giant Lennie in a Los Angeles stage production of John Steinbeck's Of Mice and Men. This led to his being cast as Lennie in the 1939 film version -- which turned out to be a mixed blessing. His reviews were excellent, but the character typed him in the eyes of many, forcing him to play variations of it for the next 30 years (which was most amusingly in the 1947 Bob Hope comedy My Favorite Brunette). In 1939, Chaney was signed by Universal Pictures, for which his father had once appeared in The Hunchback of Notre Dame (1923) and The Phantom of the Opera (1925); Universal was launching a new cycle of horror films, and hoped to cash in on the Chaney name. Billing Lon Jr. as "the screen's master character actor," Universal cast him as Dynamo Dan the Electric Man in Man Made Monster (1941), a role originally intended for Boris Karloff. That same year, Chaney starred as the unfortunate lycanthrope Lawrence Talbot in The Wolf Man, the highlight of which was a transformation sequence deliberately evoking memories of his father's makeup expertise. (Unfortunately, union rules were such than Lon Jr. was not permitted to apply his own makeup). Universal would recast Chaney as the Wolf Man in four subsequent films, and cast him as the Frankenstein Monster in The Ghost of Frankenstein (1942) and the title role in Son of Dracula (1943). Chaney also headlined two B-horror series, one based upon radio's Inner Sanctum anthology, and the other a spin-off from the 1932 film The Mummy. Chaney occasionally got a worthwhile role in the '50s, notably in the films of producer/director Stanley Kramer (High Noon, Not as a Stranger, and especially The Defiant Ones), and he co-starred in the popular TV series Hawkeye and the Last of the Mohicans. For the most part, however, the actor's last two decades as a performer were distinguished by a steady stream of cheap, threadbare horror films, reaching a nadir with such fare as Hillbillies in a Haunted House (1967). In the late '60s, Chaney fell victim to the same throat cancer that had killed his father, although publicly he tried to pass this affliction off as an acute case of laryngitis. Unable to speak at all in his last few months, he still grimly sought out film roles, ending his lengthy film career with Dracula vs. Frankenstein(1971). He died in 1973.
... (more) (less)
Tags: Actor (12), Born 1906 (4), Died 1973 (4), American (4), Famous Father (3), Horror Icon (3), Male (2), Horror Film Actor (2), Werewolf (2), B-Movie Actor (1), Son Of A Thousand Faces (1), Tv Western (1), The Wolf Man (1), Tv Actor (1), Hawkeye And The Last Of The Mohicans (1), Died Aged 67 (1), The Wolfman (1), Wolfman (1), Lawrence Talbot (1), Larry Talbot (1)
My tags:

4. Hawkeye and the Last of the Mohicans

Atomic Cinema added this to a list 5 years, 8 months ago
Horror and SciFi Guys (35 person items)

Kandi voted for an image 5 years, 9 months ago

Kandi voted for an image 5 years, 10 months ago