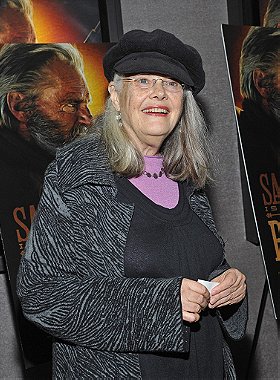 Smith also is known for her extensive work in the theatre, receiving two Tony Award nominations for originating the role of Ma Joad in The Grapes of Wrath (1990) and for the role of Halie in a revival of Buried Child in 1996. She also starred in an acclaimed Off-Broadway revival of The Trip to Bountiful in 2005 for which she received an Obie Award for Best Actress, an Outer Critics Circle Award, a Lucille Lortel Award, and a Drama Desk Award. Smith is an ensemble member of Steppenwolf Theatre Company in Chicago.

She was inducted into the American Theatre Hall of Fame in 2007 for her outstanding contributions to the theatre. In 2013, she was given a Lifetime Achievement Obie Award for excellence in Off-Broadway performances. In her career, she has taught, directed, and written for the stage. ... (more) (less)
Tags: American (4), Female (3), Actress (3), True Blood (3), Desperate Housewives (1)
My tags:

Kandi voted for an image 1 year, 1 month ago

Sons of Sparda added this to a list 4 years, 1 month ago
The Vampire Diaries Re-Casted (Novel Version) (49 person items)

kathy voted for an image 4 years, 3 months ago