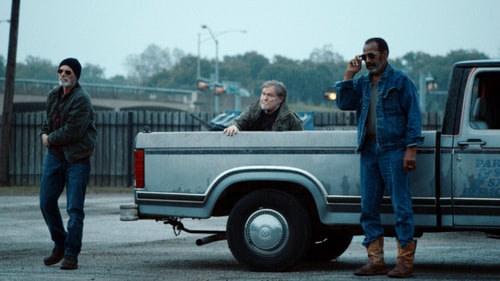 Heavenly God, what an insanely masculine, testosterone-packed motion picture this truly is. In fact, for the first time in history, I've retroactively gone back to change an annual manly movies list to incorporate this in the top spot; otherwise, I'd look like an ignorant fool. (Guns Akimbo was booted to make room, just for the record.) Shot on 16mm film, and produced to feel like a true grindhouse movie from the '70s or '80s (think Assault on Precinct 13), this is an old-fashioned masculine movie in every sense of the word: it's so violent that it feels illegal, there's drinking and smoking, and the movie centres on a bunch of old-school badasses. Indeed, this is something of an all-star cast: Stephen Lang, Martin Kove, Fred Williamson, William Sadler, David Patrick Kelly, and even fucking George Wendt who looks right at home sitting at a bar. These blokes talk like real men and sink piss non-stop, and what is manlier than men banding together to protect a female? As one of them explains, they were duty-bound to help. And for crying out loud, the men want to end the violent slaughter and get out of that situation to get to a titty bar. Even after some of their friends have died. I mean, I would sure want my friends to continue to a titty bar if I was struck down. Oh, and VFW contains surely the most over-the-top, spectacular main villain death since the 1980s. It must also be commended that VFW actually has a diverse cast, but such selections never feel forced or political. And when Lizard, the young lady, kills one of the drug addicts who are after them, it doesn't feel head-slappingly "woke"; it feels earned. VFW doesn't sideline the old dogs, but the young blood characters aren't useless.

It's not perfect - some of the cinematography is way too shaky and dark, and I have issues with Kove's character, especially the events which lead to his demise - but the quibbles are minor. It's been a long time since I've seen a movie of this ilk that was executed so damn well. Gentlemen, this is a badass manly movie for the ages; an instant classic. 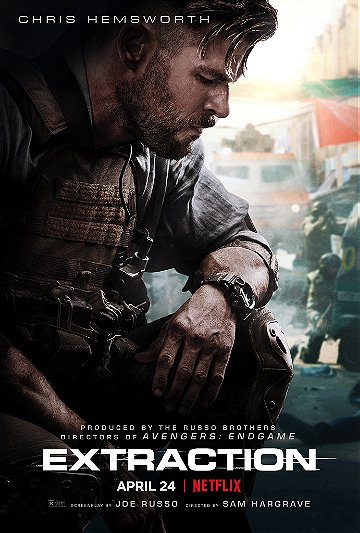 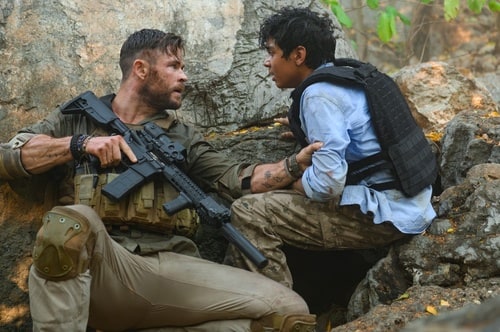 A film which dropped on Netflix at just the right time while countries around the world were in their first lockdown, Extraction is a badass, old-school, R-rated action extravaganza that should satisfy just about anybody seeking an action fix. It's the feature-length directorial debut for Sam Hargrave, a long-time veteran stuntman and second unit director (he worked on Avengers: Infinity War and Avengers: Endgame) who went to great lengths to pull off some of the insane action cinematography. And the best part about Extraction is that it seldom grows dull through either repetition or too much plot, as the action sequences vary throughout - there are shootouts and fights, as well as some vehicular mayhem to boot. The vicious, R-rated violence is a breath of fresh air in 2020, and the production values are uniformly impressive from top to bottom. Hell, the filmmakers also realised the futility of making Chris Hemsworth attempt an accent, so he gets to play an Australian and it's right in his wheelhouse. This is superb, manly entertainment. 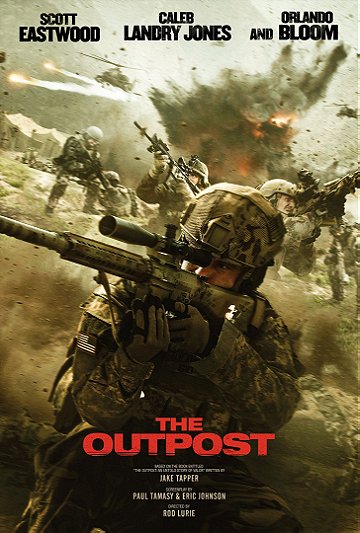 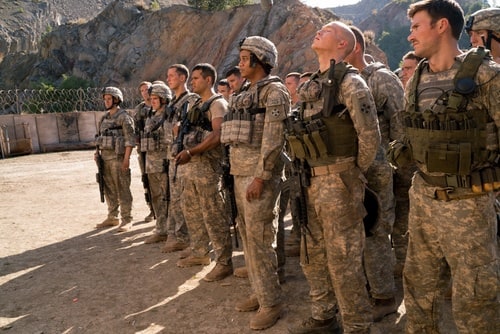 Well, this one came out of nowhere. I was not familiar with the story depicted in The Outpost, and I wasn't aware that this film was coming until its quiet release in America during the lockdown. This is not only one of the best manly movies of 2020 - it's also one of the best movies of the year, full stop. It's the latest film from director Rod Lurie, who has a habit of making superb, criminally underrated movies every few years (see 2008's Nothing But The Truth). First things first, the depiction of military life here is absolutely spot-on, as every detail and line of dialogue rings true. Indeed, it perfectly portrays the banality and difficulties of life on deployment, with all the associated bullshit, and the bantering between the characters feels authentic in every scene, with some gallows humour thrown in for good measure. The cast all hit their marks exceptionally, though Orlando Bloom playing a 27-year-old is a bit of a stretch. The authenticity of the set design and costumes is also sublime - there are a couple of moments with obvious digital effects, but these aren't frequent or overly problematic. When the battle begins, the resulting extended action sequence is riveting in every way, and it's hard to tear your eyes away from the screen. The Outpost is one of the best depictions of modern warfare to date, right up there with Black Hawk Down, and it deserves to be seen on the biggest possible screen. 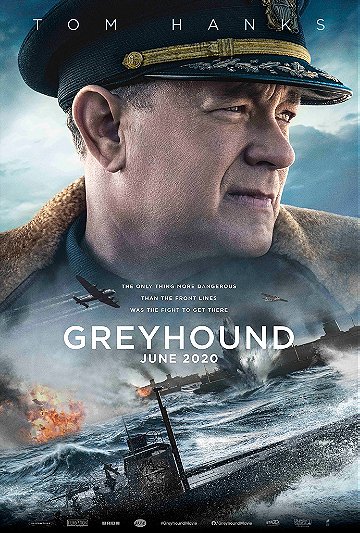 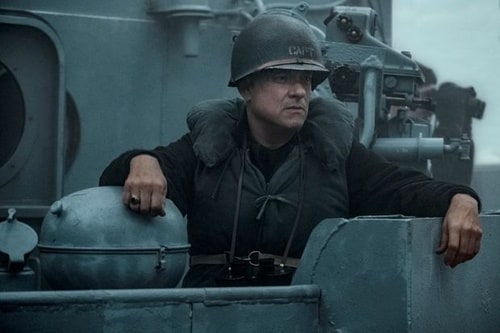 For the majority of its terrifically brisk runtime, Greyhound plays out as if the production was overseen by a grizzled war veteran who told the production crew to stop if they tried to film a scene that strayed away from the focus of the story. Indeed, aside from some brief home scenes to flesh out Tom Hanks' role, Greyhound is laser-focused and moves at lightning speed; it's a visceral, enthralling "you are there" movie which places you in the thick of the action as the titular ship strays through perilous waters without air protection, wherein German submarines can be under any wave. It's also not dumbed down, as the characters speak in authentic military dialogue, making you feel as if you just wandered onto an actual warship in World War II. I wouldn't say that this is a necessary deep or sophisticated movie, as the characters are thinly drawn and names don't stick, but it's still a riveting watch from start to finish. If anything, I just wish it didn't look so patently digital, but I guess that's all part of the intended aesthetic. For the most part, this is a superb, old-fashioned manly movie that fathers and grandfathers everywhere will devour with relish. 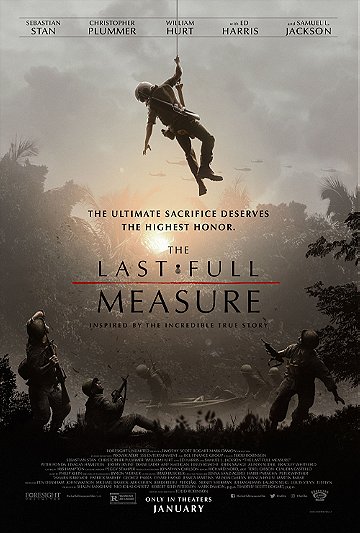 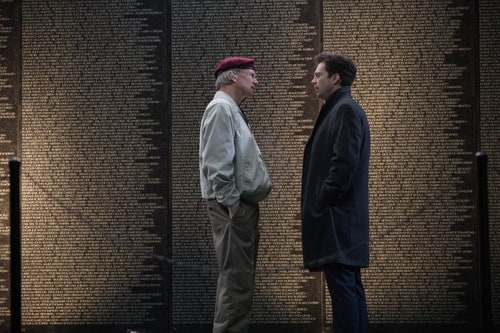 Continuing with the war theme, we have the terrific war drama The Last Full Measure, which earns its inclusion on this list due to the powerful themes of brotherhood and heroism at the heart of this true untold story. Plus, look at that freaking cast - in addition to the Winter Soldier himself, Sebastian Stan, we also have old-school manly men like William Hurt, Ed Harris, Christopher Plummer and Samuel L. Jackson, who really bring the gravitas to this material. This is an old-school movie in every sense of the word, and it feels like it should’ve been made in the 1990s - think in the vein of Courage Under Fire. There are brief battle sequences which certainly do deliver, but it’s the story which will stick with you long after the credits have rolled. It took a while to bring this story to the screen, and I’m glad I took the time to watch it. 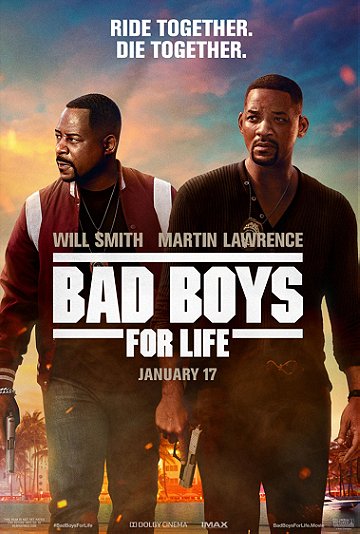 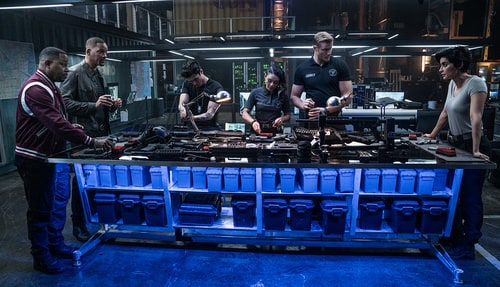 17 years after the heavily criticised but still enormously entertaining Bad Boys II, Will Smith and Martin Lawrence finally return with 2020's long-delayed Bad Boys for Life. With Michael Bay stepping away for this sequel, Belgian directors Adil El Arbi and Bilall Fallah enter the fray, aided by screenwriters Chris Bremner, Peter Craig (The Town) and Joe Carnahan (Narc). Rather than a stale, lazy rehash of established franchise tropes, Bad Boys for Life gives the brand some life-saving reinvention, introducing unexpected storytelling maturity while also taking the narrative seriously for once. It's definitely a Bad Boys movie, as the new filmmaking team maintain the franchise's longstanding proclivity for violence, profanity, bantering, and other masculine virtues, but this third instalment is more good-natured and likeable, thanks in large part to Bay's creative departure. The result is a welcome and refreshing surprise, surpassing all reasonable expectations with confidence. It’s funny, it’s full of great action, and it’s a treat to see Smith and Lawrence back in action. 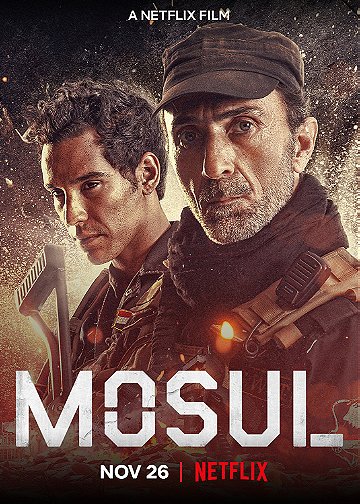 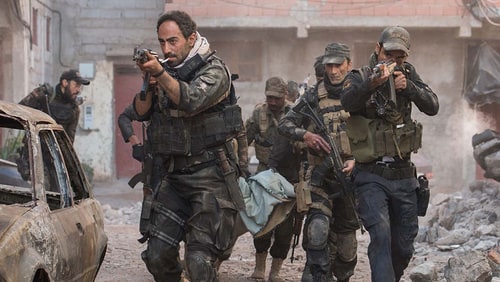 Produced by the Russo Brothers, this is an exceptional action-thriller about a squad of special police who hunt down and kill ISIS soldiers. This is an especially important movie, too, as it shows that Iraqi people were actively involved in, and passionate about, ending ISIS's viciously violent reign over the country. Luckily, this message is subtle and more of a subtext; it's not as if there's any heavy-handed political agenda about Muslims. And, boy, this is one badass war flick full of heartstopping, skilful action sequences that kept me on the edge of my seat. Mosul is on Netflix and won't take up much of your time, so I recommend taking the time to watch it. 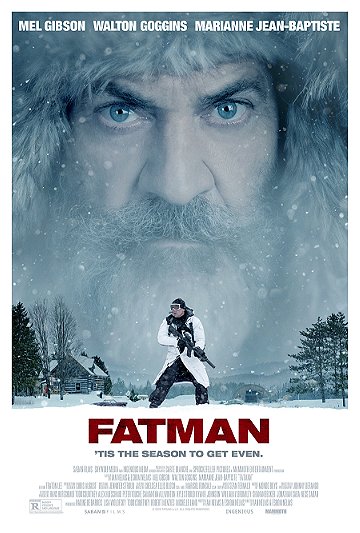 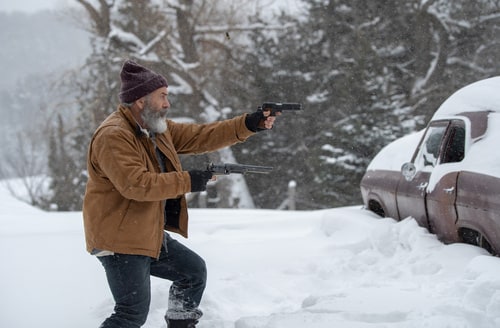 A new Christmas cult classic is born with 2020's Fatman, an eccentric mix of fantasy, violence and black comedy which will interest those who enjoy quirkier festive flicks like Rare Exports, Krampus or 2003's iconic Bad Santa. Indeed, rather than a saccharine holiday picture designed to generate warm or fuzzy feelings, writer/directors Eshom and Ian Nelms (Small Time Crime) put their own unique, distinctly dark spin on the holiday season here, with its assorted traditions and iconography. With its unmistakable grittiness, as well as the underlying cynicism about the current state of the modern world, Fatman is an oddly appropriate and timely festive movie for 2020, and it is worth your attention if the concept appeals to you. Although not perfect, it's truly refreshing to see a Christmas film with genuine personality and even a dollop of emotion, as opposed to something more formulaic and factory-made. 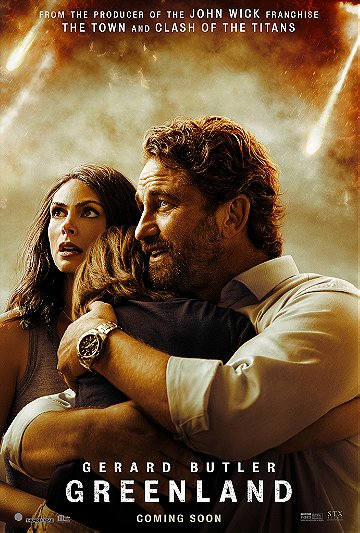 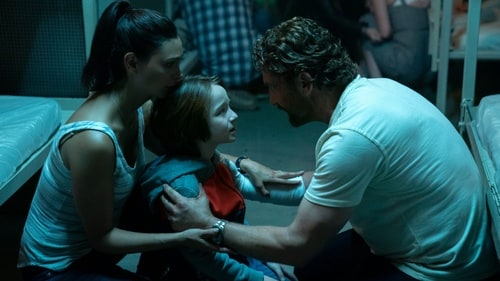 Here we have more of a left-field entry... a PG-13 disaster film. However, it was directed by manly movie veteran Ric Roman Waugh (Angel Has Fallen), and it has Gerard Butler, so its spot is deserved on this list. This isn't a manly movie because it's full of vicious violence and profanity, but because it's about a dedicated father going to the ends of the Earth to save his family as the planet faces an extinction-level event. Not much deters Butler's character, who's determined to secure his family's survival as the clock is ticking. And, hey, the presence of Scott Glenn in a minor role helps to amplify the masculinity. This is one intense fucking flick which refuses to let you breathe as it moves along, and it's nicely polished to boot. It's not exactly the most enjoyable watch (it's more grim than Roland Emmerich's ridiculous 2012), but it is quality adult entertainment that's worth your time. 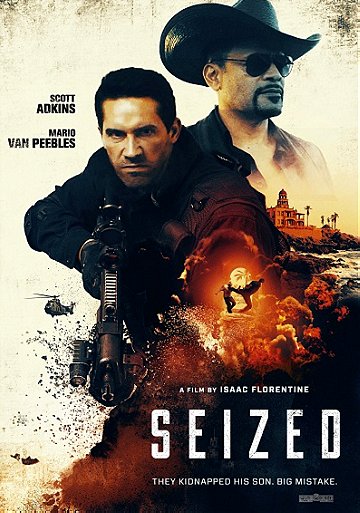 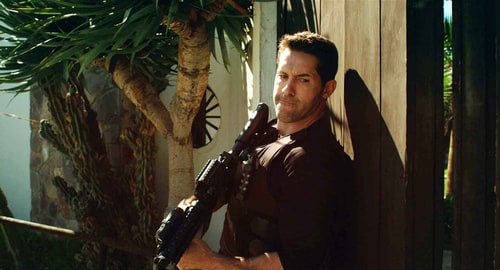 I'm always interested in any new Scott Adkins action film, as he's the most reliable contemporary action star that we have, and I was especially excited for Seized because it sees Adkins reunite with director Isaac Florentine (Ninja, Close Range, Undisputed II & III, etc). First things first, this is a pretty cheap-looking movie and there isn't much in the way of gravitas in between the violence and action, but I can't say I minded too much. What matters is that Seized is jam-packed with violent, insanely fun action sequences, showcasing Adkins doing exactly what he does best. There are fights and shootouts, and Adkins is still likeable while he wreaks havoc because he's being forced to kill everyone in sight to save his son. Indeed, this is something of a modern Commando. I also appreciated the presence of Mario Van Peebles who chews the scenery with utmost relish. I had a great time watching Seized, and it will be enjoyed by fans of the genre.

Celebrities who served in the military (US/UK) by SwtChaos

100 Greatest Actors and Where I've Seen Them by NMartucci

Famous faces on Real husbands of hollywood by william maxey 83

My Favourite Film Stars by Kenji

Top Celebrities I'd Like To Have A Beer With by PvtCaboose91