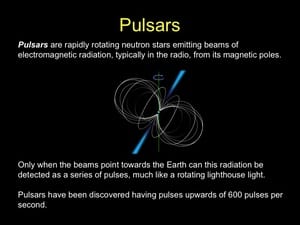 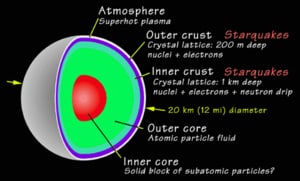 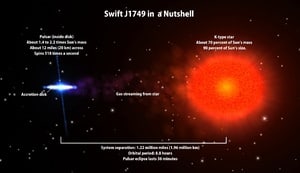 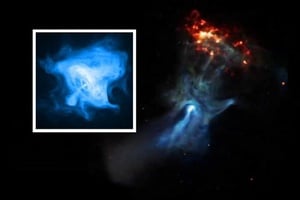 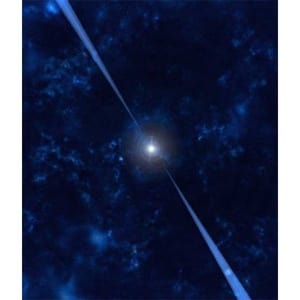 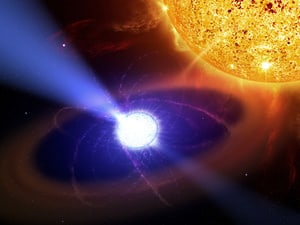 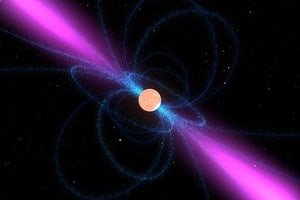 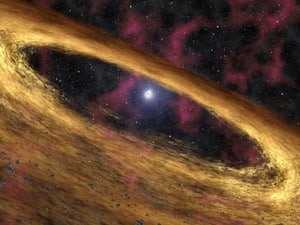 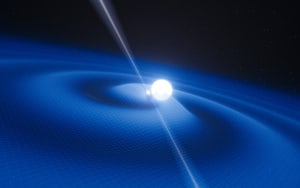 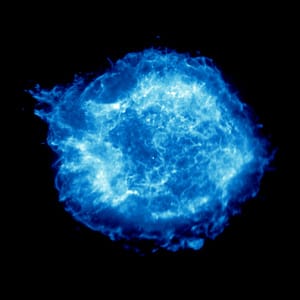 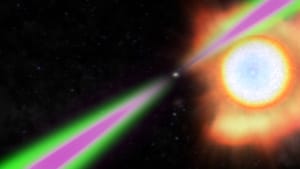 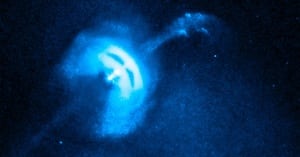 Some of these pictures are artists renditions and some actual photograhs taken by NASA. The light beam from a Pulsar would mostly be out of our range of vision, occurring at to high a frequency to register in our eyes. What NASA'a pictures show are photographs taken in the RF and X-Ray range and "converted down/colorized" so they can be seen or extra-galactic particles excited by the high energy stream and emitting light in our visible spectrum.
Enjoy!
:D

A neutron star forms when a massive star explodes as a supernova, leaving behind an ultradense core. Most known neutron stars emit regular pulsations that are powered by rapid spins. Astronomers have found nearly 1,800 of these so-called pulsars in our galaxy. Pulsars have incredibly strong magnetic fields by Earthly standards, but a dozen of them — slow rotators known as magnetars — actually derive their energy from incredibly powerful magnetic fields, the strongest known in the universe. These fields can stress the neutron star’s solid crust past the breaking point, triggering starquakes that snap magnetic-field lines, producing violent and sporadic X-ray bursts. Source; NASA

A pulsar is a highly magnetized, rotating neutron star that emits a beam of electromagnetic radiation. This radiation can only be observed when the beam of emission is pointing toward the Earth, much the way a lighthouse can only be seen when the light is pointed in the direction of an observer, and is responsible for the pulsed appearance of emission. Neutron stars are very dense, and have short, regular rotational periods. This produces a very precise interval between pulses that range from roughly milliseconds to seconds for an individual pulsar.
The precise periods of pulsars makes them useful tools. Observations of a pulsar in a binary neutron star system were used to indirectly confirm the existence of gravitational radiation. The first extrasolar planets were discovered around a pulsar, PSR B1257+12. Certain types of pulsars rival atomic clocks in their accuracy in keeping time. Source; Wikipedia

When we think of light, most of us never think about light that is not visible. Light from x-rays is coming at us from many different objects and sources in space. If we had x-ray vision we would see a lot more when we looked out into the heavens, than we can see now. Many astronomers believe that one of the causes of x-rays is extremely high temperatures When I talk about high temperatures I am not talking about temperatures on the order of thousands of degrees that can melt metal or even hundreds of thousands of degrees, but rather temperatures of millions of degrees. It makes you wonder how something can get this hot doesn't it? It just so happens that there are things out there that can do this, such as very strong magnetic or gravitational fields. Even these methods are not the only methods for creating such superheated plasmas and such. There are explosions out there, explosions of such tremendous force that our purely human minds can not even imagine. One type of such an explosion would be a nova. A nova is an exploding star. Try and picture this in your mind, an object the size of a sun, which by the way is not particularly large for a star, blowing up. Source; NASA

My dedicated lists ☻ by Antares

Favorite Images of Crustaceans #1 by kathy

Mafalda's Funny Gifs... For You Gaby My Friend :) by Dark Warrior

Pretty As A Picture #7 (Nature) by Iceviper