Summary: The book is a recollection of Paulo's experiences as he made his way across Northern Spain on the Pilgrimage of Santiago de Compostela in 1986. It starts as he fails his initiation into the order Regnus Agnus Mundi (RAM) and is then told he must complete the pilgrimage to gain rite of admission. He begins his journey with a guide, also a member of RAM, who goes by the alias Petrus. During the journey Petrus shows him meditational exercises and introduces him to some of the more down to earth elements of Western mystical thought and philosophy.
Danie's rating:

0
The Alchemist: A Fable About Following Your Dream... - Paulo Coelho
Original Title: O Alquimista
Year Published: 1988 (in english: 1993)
Curious Facts: It has sold more than 65 million copies in more than 150 countries, becoming one of the best-selling books in history.

Summary: It follows Santiago, a young Spanish shepherd, on a journey to fulfill his Personal Legend.

Summary: It tells the story of Brida O 'Fern, a 21-year-old irish girl in search of magic and hidden powers of modern witchcraft. During her search, she meets a wizard who promisses to guide her by the Tradition of the Sun, which explains everything by nature and its divine manifestations. But Brida decides to take Wicca as a teacher, a beautiful woman who teaches trhough the Tradition of the Moon, the ancient tradition of witches, which explains the universe through Wisdom and Time.

0
The Valkyries: An Encounter with Angels - Paulo Coelho
Original Title: As Valquírias
Year Published: 1992
Curious Fact: It's an autobiography.

Summary: It deals with the exorcism of personal demons and discovering one's strength. It also deals with relationships among people, in this case, Paulo and his wife. The plot involved Paulo going to the Mojave desert to meet "the Valkyries" themselves, a group of warrior women who travel the desert. At the beginning of the story, "J", Coelho's master in RAM, shows him a copy of the poem by Wilde that says "we destroy what we love" and this theme is central to the story.
Danie's rating:

0
By the River Piedra I Sat Down and Wept - Paulo Coelho
Original Title: Na Margem do Rio Piedra, Eu Sentei e Chorei
Year Published: 1994
Curious Fact: This is the first part in Coelho's trilogy "On the Seventh Day". The other two parts are Veronika Decides to Die and The Devil and Miss Prym. This trilogy is a week in the life of someone ordinary to whom something extraordinary happens.

Summary: It is essentially a story about love. It also includes elements of paganism; in particular it focuses on the female aspect of divinity. The story focuses on Pilar, an independent young woman, who is frustrated with the grind of university life and looking for greater meaning. Pilar's life takes a turn when she meets up with a childhood sweetheart, who is now a spiritual teacher and a rumoured healer and miracle worker. They set off on a journey through the French Pyrenees as the journey unfolds.
Danie's rating:

Summary: This story may be considered religious, despite a strong focus on the theme of rebellion against God. In this book, Coelho has explored the manner in which the prophetic questioning of authority, rebellion and liberation, and 'thinking for oneself' are important in one's relationship with God and one's life work.

For a considerable portion of the story Elijah is very compliant, obeying everything God's angels say. Eventually he realises that his destiny is not being chosen by him but by God. Ultimately he decides to do go by his own desires and will. In this way Coelho suggests that Elijah was able to reach an ultimate level of spiritual awareness and have the most powerful relationship with God.

0
Manual of The Warrior of Light - Paulo Coelho
Original Title: Manual do Guerreiro da Luz
Year Published: 1997 (in english: 2003)
Curious Fact: The book's content was first published in various Brazilian newspapers between 1993 and 1996. It was compiled in 1997, given a prologue and epilogue, and then published under its current title.

Summary: It's a collection of Paulo Coelho's teachings summed up into one volume. It includes proverbs, extracts from the Tao Te Ching, the Bible, the book of Chuang Tzu, the Talmud and various other sources, and is written in the form of short philosophical passages.
This book is written as if it were an actual handbook for a supposedly Templar or Paladin warrior, the warrior however being a metaphor not for those who serve a certain lord, an ideal or the weak, but for those in pursuit of their dreams and who appreciate the miracle of life. The manual describes the challenges the warrior faces and solutions to the problems, including paradoxes (such as the section "sometimes the Warrior behaves like a rock" is followed directly by "sometimes the Warrior behaves like Water". Rock (stability) and Water (flexibility) are given as opposite metaphors in Taoism).

Summary: It tells the story of 24 year old Veronika, who appears to have everything in life going for her, but who decides to kill herself. This book is partly based on Coelho's experience in various mental institutions. It is based around the subject of madness. The gist of the message is that "collective madness is called sanity".
Danie's rating:

Summary: The book tries to find an answer to a question that arises in the human mind at times of distress, rejection or betrayal. Put simply, the question is "Are people bad?".
For almost fifteen years, old Berta had spent everyday sitting outside her front door, watching over the little, idyllic village Viscos, occasionally talking with her deceased husband. She is waiting for the devil to come, as her husband has predicted to her. Then one day a stranger appeared with the intention of staying one week in the village. Somewhere in the wood he buries a treasure – 11 bars of gold. On the way back he meets Chantal Prym, a young and rather beautiful barmaid, who is bored of the idyllic scenery and slow place of life. The stranger shows her the buried treasure and promises that it will belong to the villagers if they agree to kill someone until the week is over.
Danie's rating:

Summary: Maria is from a small town in Brazil and goes to seek her fortune in Switzerland, only to find that reality is harsher than she expected and she ends up working in a brothel on Rue de Berne, the heart of Geneva's red-light district. The book deals with issues surrounding sex and sexuality, such as prostitution, sacred sex, and sex in the context of love. Because of its graphic descriptions, the novel has been described as "erotic".
Maria is on journey to find what true love is but ends up letting her own life guide her. She enters a life that leads her down the path of sexual awakenings and almost leads to her self-destruction when she is introduced to all sides of sexual experience. When she has given up hope to find true love she meets a painter with whom she falls in love. And she must now choose where to take her life. Either to let it lead her or finally take control of her life and end this subtle self-destructive life she is leading.
Danie's rating:

0
The Zahir: A Novel of Love, Longing and Obsession... - Paulo Coelho
Original Title: Zahir
Year Published: 2005
Curious Fact: The story is extremely autobiographical but is intended as a work of fiction.

Summary: Similarly to The Alchemist, the Zahir is about pilgrimage. The book touches on themes of love, loss and obsession.
The Zahir means 'the obvious' or 'unable to go unnoticed' in Arabic. The story revolves around the narrator, a bestselling novelist, and his search for his missing wife, Esther. He enjoys all the privileges that money and celebrity bring. He is suspected of foul play by the authorities and the press of having a role to play in the inexplicable disappearance of his wife from their Paris home. Thereby, the protagonist is forced to re-examine his own life and marriage as well. The narrator is unable to figure out what led to Esther's disappearance. Was she abducted or had she abandoned their marriage? He comes across Mikhail, one of Esther's friends. The narrator with his help realizes that to find Esther, he must find his own self. Mikhail introduces him to a tribe who has unconventional ways of living. Through the narrator's journey from Paris to Kazakhstan, Coelho explores various meanings of love and life.

Summary: This is a collection of reflections from Paulo Coelho. In this riveting collection of thoughts and stories, he offers his personal reflections on a wide range of subjects from archery and music to elegance, travelling and the nature of good and evil. An old woman explains to her grandson how a mere pencil can show him the path to happiness! Instructions on how to climb a mountain reveal the secret to making your dreams a reality. This work presents the story of Ghengis Khan and the Falcon that teaches about the folly of anger - and the art of friendship; and a pianist who performs an example in fulfilling your destiny. The author learns three important lessons when he goes to the rescue of a man in the street - Paulo shows us how life has lessons for us in the greatest, smallest and most unusual of experiences.
Danie's rating:

Summary: As the book begins, Athena is dead. How she ended up that way creates the intrigue sustaining the book.[2] The child, Sherine Khalil renames herself Athena. As a child, she shows a strong religious vocation and reports seeing angels and saints, which both impresses and worries her parents.
She grows into a woman in search of answers to many questions that arise within a person. She has a contented life but her mind is not at ease. So she sets out to find answers to the classical question of "Who am I?" through many experiences. In her quest, she opens her heart to intoxicating powers and becomes a controversial spiritual leader in London.
The Witch of Portobello knows all. But the best way of knowing the meaning of life is by learning from one's student. A teacher can only make us aware of our capabilities but finding the right path is up to the student. There are many ways to achieve happiness by being close to the Mother. 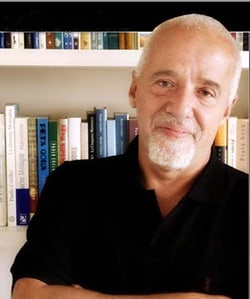 Paulo Coelho is a Brazilian lyricist and novelist. He has published 26 books. Two of them - The Pilgrimage and The Valkyries - are autobiographical, while the majority of the rest are fictional, although rooted in his life experiences. Others, like Maktub and The Manual of the Warrior of Light, are collections of essays, newspaper columns, or selected teachings. In total, Coelho has sold more than 100 million books in over 150 countries worldwide, and his works have been translated into 67 languages. He is the all-time bestselling author in the portuguese language.

Music for feelings by edwardsheroin

Movies watched in 2010 by Miklécio Costa

The Best Of The Best by Allia

Watched in 2010 - Best to Worst by Felipe Unger

Tv Shows Made Into Movies by Danie