Located in the constellation of Canes Venatici is an exquisite object known as M51, the Whirlpool Galaxy. This was one of Messier's original discoveries. He found it in 1773 while observing a comet. M51 is a beautiful example of a face-on spiral galaxy. The obvious spiral shape of this object is what gave it the name, Whirlpool. It was the first spiral galaxy to be discovered. Careful observation reveals that this object is actually two galaxies. The second, known as NGC 5195, is interacting with M51. The outer regions of the two galaxies actually touch each other. M51 is located about 37 million light-years from Earth. Under dark skies, it is an easy target for small telescopes. It is one of the brightest and easiest galaxies to locate for the experienced amateur. 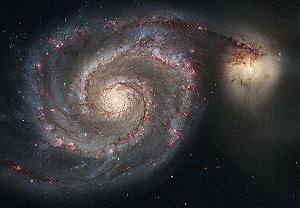 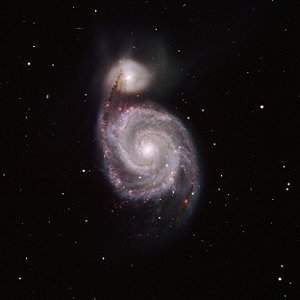 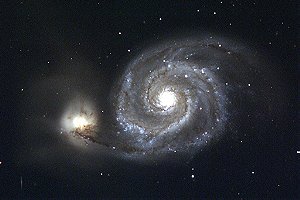 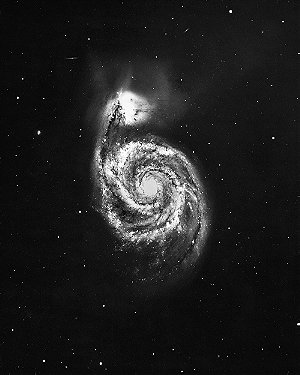 M52 is an open cluster of stars situated within the constellation of Cassiopeia. It can be seen against the backdrop of a Milky Way field. This object has been described as a "salt and pepper" cluster due to its dense arrangement of about 200 bright stars. M52 is believed to be only 23 million years old. Its distance from Earth is not certain. Estimates range anywhere from 3,000 to 7,000 light-years. With a magnitude of 7.3, this cluster is easily visible to an observer with binoculars. A small telescope will reveal the cluster's fainter stars. 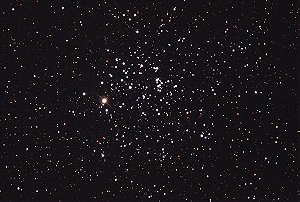 A distant globular cluster can be found within the Coma Berenices constellation. This is M53. It is among the more distant globulars, situated about 60,000 light-years from the galactic center. This would put it at about 62,000 light-years from Earth. The cluster has a diameter of around 250 light-years. M53 has a magnitude of 7.6, which makes it a good target for binoculars. Viewing through a telescope will show the intricate glittery structure that is the trademark of most globular clusters. 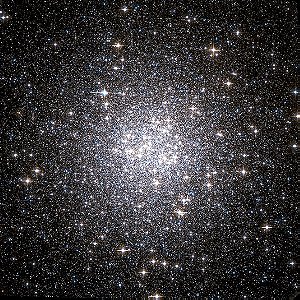 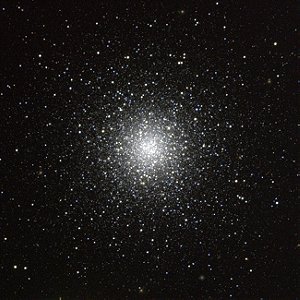 Located in the constellation of Sagittarius is a globular cluster known as M54. It is one of the brighter globular clusters in the sky. This object's close proximity to Zeta Sagittarii, the southernmost star in the constellation, makes it very easy to find. Although this cluster is bright, it is small. It could be mistaken for a star in binoculars. A telescope is really the best way to view this fine object. M54 is estimated to be about 60,000 light-years from Earth. Some controversy has recently surfaced about this cluster. Some astronomers believe that it may not be a part of our galaxy at all, but of a newly discovered dwarf galaxy. If this turns out to be true, its distance from Earth could be as much as 80,000 light-years. It would also be the first extragalactic globular cluster to ever be discovered. 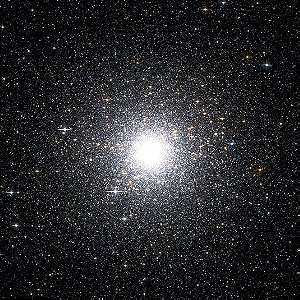 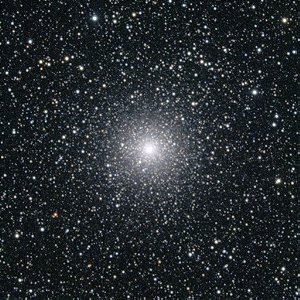 Another fine globular cluster to be found in Sagittarius is M55. This is a large cluster with a somewhat loose arrangement of stars. Its apparent size is about 2/3 that of the full moon. It has a diameter of about 110 light-years, and is believed to be located only 20,000 light-years from Earth. This would make it among the closest of the globular clusters. M55 has been described as very grainy in appearance, due to its loose structure. Its size and brightness make it easy to identify in binoculars. Through a small telescope, its grainy structure will be more apparent. 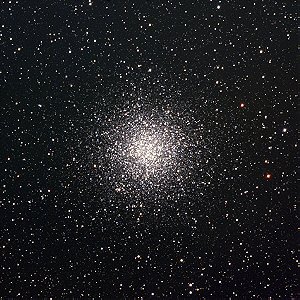 In the constellation Lyra can be found a small, dim globular cluster known as M56. This cluster lacks the bright core that is visible in many other globulars. It is believed to have a diameter of only 60 light-years, and is located about 45,000 light-years from Earth. It is actually approaching us at a speed of about 145 km/sec. Due to its small size and magnitude of only 8.3, M56 is not a great object for the binocular astronomer. Telescopes larger than 10 inches can resolve the cluster quite nicely. 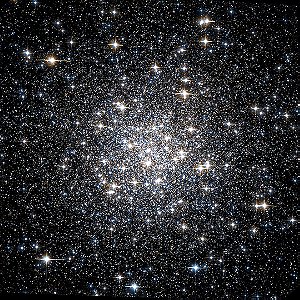 The constellation Lyra is also home to one of the most famous objects on the sky. M57, the Ring Nebula, is probably the finest example of a planetary nebula anywhere in the sky. It was formed when a star about the size of the Sun neared the end of its life cycle and shed its outer shell of hydrogen gas. This shell of material is illuminated by the remains of the star, known as a white dwarf, in the center. The nebula is well known for its beautiful colors, ranging from red to yellow, green, and blue. Its age is estimated at about 5,500 years. Its distance from Earth is not very well known. M57 can easily be seen in a small telescope, but a large instrument is needed to see the 13th magnitude star at its center. 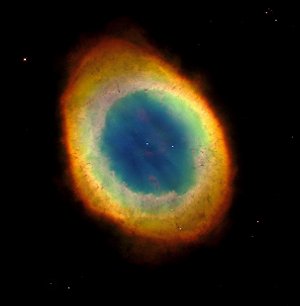 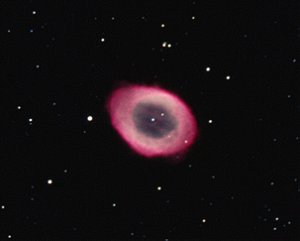 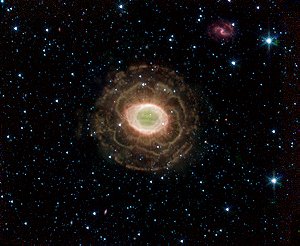 The Virgo constellation is home to a small galaxy known as M58. This galaxy is classified as a barred spiral due to its elongated shape. It is one of four such objects in the Messier catalog. M58 is one of the brightest members of a cluster of galaxies known as the Virgo cluster. Its distance from Earth is around 60 million light-years. As with most distant galaxies, it requires a large telescope and excellent observing conditions to show any detail. An 8-inch or larger scope will reveal the galaxy's barred shape as well as a hint of its spiral arms. 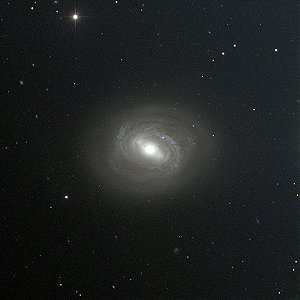 Another member of the Virgo cluster of galaxies is M59. It is an elliptical galaxy about 90,000 light-years across and is located some 60 million light-years from the Earth. This is one of the larger elliptical galaxies in the Virgo cluster. The shape of this galaxy is quite flattened in appearance. With a magnitude of only 9.6, M59 is not a very suitable target for binoculars. Even in large telescopes it is only visible as an elongated fuzzy blob. 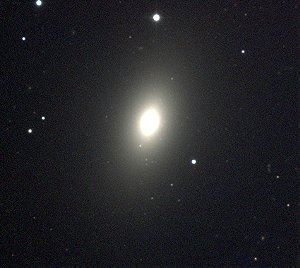 M60 is a large elliptical galaxy that is also located within the Virgo cluster of galaxies. It is the eastern most galaxy in the cluster. This galaxy is believed to be around 120,000 light-years in diameter. It is located about 60 million light-years from Earth. M60 is one of the brighter members of the Virgo cluster. It can be found with binoculars, but is not a very impressive sight. Telescopes will reveal the galaxies bright central core. As with most ellipticals, it will only be visible as a fuzzy blob. 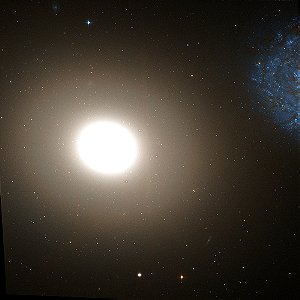 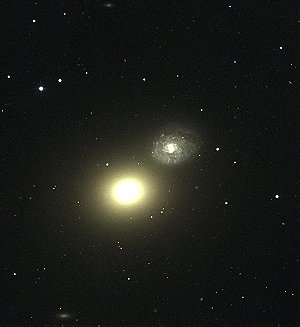 The Messier objects are a set of over 100 astronomical objects first listed by French astronomer Charles Messier in 1771.[

This Day in Movie History- December 18th by BradWesley123

The Films I Watched at the Theaters by diabolical dr voodoo

Places In San Francisco To See by moviebuff