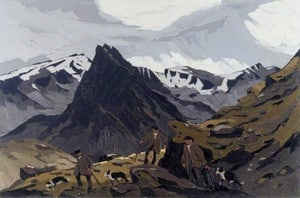 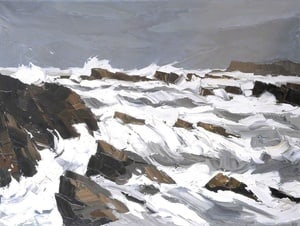 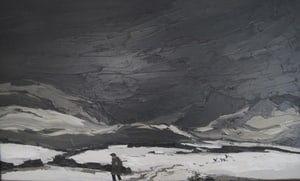 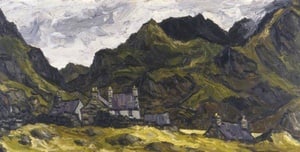 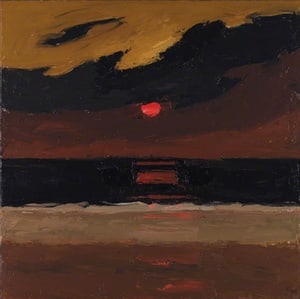 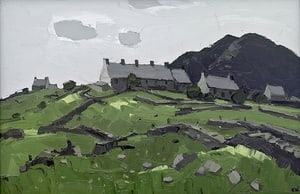 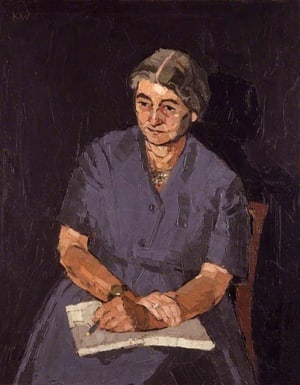 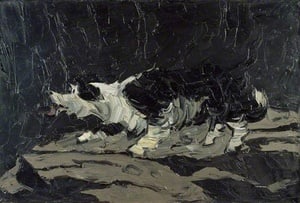 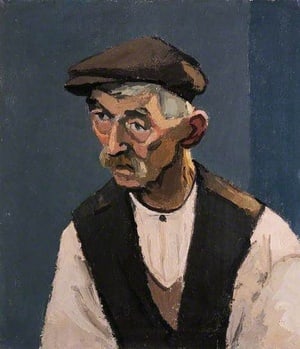 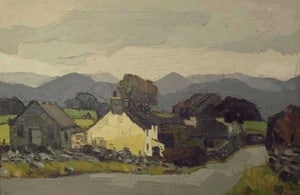 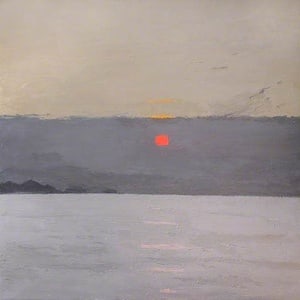 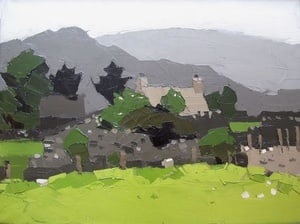 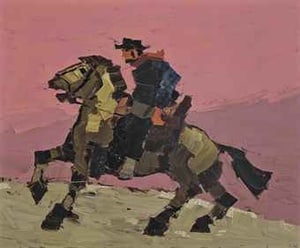 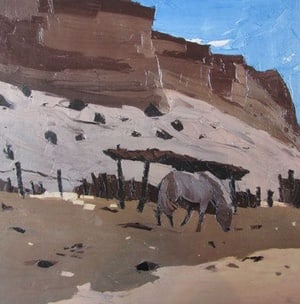 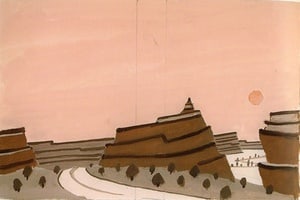 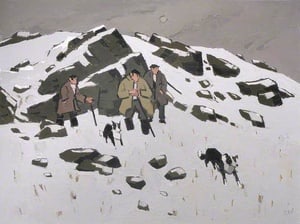 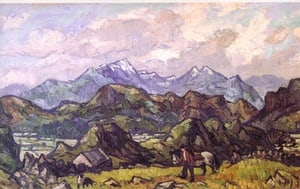 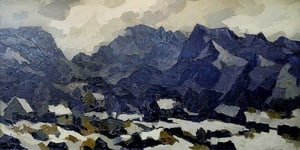 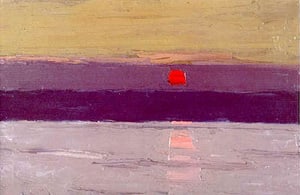 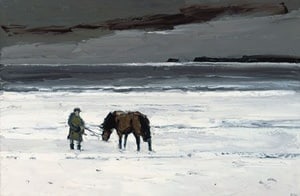 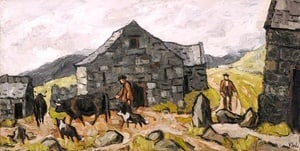 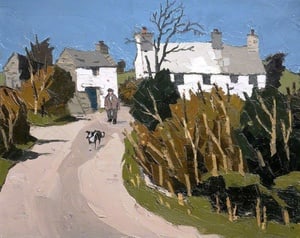 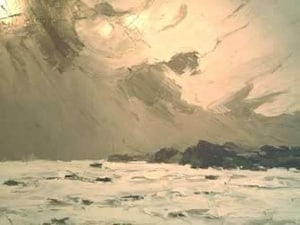 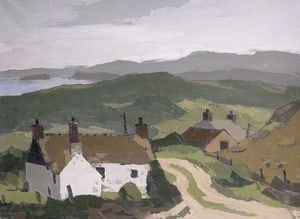 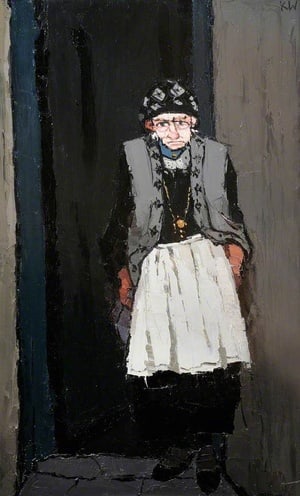 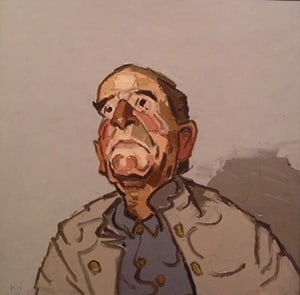 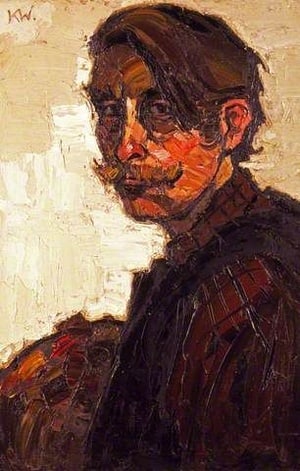 Welcome to the world of Welsh artist Kyffin Williams, whose landscapes (and seascapes) captured with unsentimental conviction the wintry atmosphere and farming lives of North West Wales. Look for 3 paintings of Patagonia, Argentina, where a Welsh colony settled in the 19th century. And a self portrait of Kyffin himself, to round things off.

Sir John "Kyffin" Williams, KBE, RA (9 May 1918 – 1 September 2006) was a Welsh landscape painter who lived at Pwllfanogl, Llanfairpwll on the Island of Anglesey. Williams is widely regarded as the defining artist of Wales during the 20th century.

Williams was born in Llangefni, Anglesey into an old landed Anglesey family. His father was a bank manager. Kyffin Williams was educated at Moreton Hall School then Shrewsbury School before joining the 6th Battalion Royal Welch Fusiliers as a lieutenant in 1937. After he failed a British Army medical examination in 1941 (because of epilepsy), his doctor advised him to take up art for the sake of his health.

Despite academic difficulties, Williams enrolled at London's Slade School of Fine Art in 1941 and taught art at Highgate School, London, where he was senior art master from 1944 until 1973. His pupils included the historian Sir Martin Gilbert, Royal Academicians Anthony Green and Patrick Procktor and composers John Tavener and John Rutter. In 1968 he won a scholarship (Winston Churchill Fellowship) to study and paint in Y Wladfa; the Welsh settlement in Patagonia.

Williams died on 1 September 2006, aged 88, at a nursing home in Anglesey. He had been suffering from lung cancer, believed to be a result of working with lead-based paints. Williams was buried at St Mary's Church, Llanfair-yng-Nghornwy. Paying tribute to Williams after his death, bass-baritone singer and Williams collector Bryn Terfel said, "I'm deeply saddened by the passing of Wales's foremost ambassador in the visual arts. Long may his memory live on in the legacy of his numerous, wonderful paintings."

Later in 2006, the Welsh singer and Manic Street Preachers frontman James Dean Bradfield included a track called "Which Way to Kyffin", dedicated to Williams, on his album The Great Western.

His works typically drew inspiration from the Welsh landscape and farmlands. His works may be seen in a permanent exhibition at Oriel Ynys Môn, Anglesey, as well as at many other galleries elsewhere in Britain. He was President of the Royal Cambrian Academy and was appointed a member of the Royal Academy in 1974.

In 1995 Williams received the Glyndŵr Award for an Outstanding Contribution to the Arts in Wales during the Machynlleth Festival. He was awarded the OBE for his services to the arts in 1982 and a KBE in 1999.

During his later life, Williams befriended the artist Rolf Harris. Harris had always been an admirer of Williams' work and said that during exhibitions at the Royal Academy he would always immediately search for Kyffin's work.

The Oriel Kyffin Williams gallery was opened during the summer of 2008. The Kyffin Williams Drawing Prize was established, and is due to be awarded for the first time during 2009.

In February 2011 it was announced that Williams' paintings of Patagonia would be shown for the first time. It is of note that his last passport, on show in the Oriel Ynys Môn gallery at Llangefni; 2004–2014, has the name Sir John Williams. Kyffin was his grandmother's maiden name.

Williams' works are held in many public collections, including the Government Art Collection, the Arts Council Collection and the National Museum of Wales.
(Wikipedia)

My favorite books by compcua