How To Win A Court Case 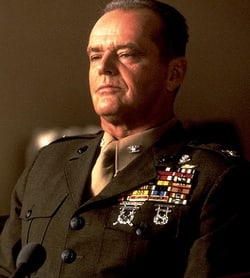 In discussing courtroom dramas, naturally some spoilery elements are going to crop up – and some people, as they say, just can’t handle the truth – so we begin our meander around trial movie history with a film that’s deeply ingrained in popular culture.

That’s right, it’s Jack Nicholson and Tom Cruise yelling at each other in the most official-sounding Sorkinese known to man... and we don’t say that lightly.

Jumping from intimate whispers to incredibly aggressive accusations in milliseconds, enduring threats of contempt of court while Kevin Bacon bellows “Object!”, Kaffee eventually riles Jessep up so much that he digs his own grave: “DID YOU ORDER THE CODE RED?” “YOU’RE GODDAMN RIGHT I DID!”

So after all those dramatic capital letters, it goes to show – in courtroom movie-land, at least – that sometimes getting them angry is just the ticket.

2. Have The Perfect Expert Witness 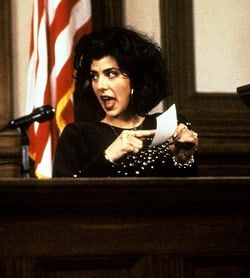 Now let’s be honest, My Cousin Vinny isn’t exactly the Citizen Kane of courtroom dramas, but it is a bit of a laugh. But that’s to be expected with a movie about a novice personal injury lawyer from New York – played by Joe Pesci, no less – attempting to defend his cousin Billy Gambini (Ralph “Karate Kid” Macchio) and his friend from a trumped up murder rap hooked on some seriously incriminating circumstantial evidence.

Having only just passed the bar after six years and six attempts, and with no trial experience, the leather-jacketed Brooklyn barrister needs a miracle to save his kid cousin from the full force of Chamberlain Haller’s (Fred “Herman Munster” Gwynne) unique form of Alabaman justice.

That miracle, would you believe, comes in the form of Vinny’s sassy car-loving girlfriend Mona Lisa Vito (Marisa Tomei), whose amazingly detailed knowledge of Buick Skylark tyre tracks might just save the day, Deus-Ex-General-Machina style. Tomei’s performance, on the stand and elsewhere (fixing water taps, getting stuck in the mud, ordering gritz at the local café) won her the rarest of accolades – an Oscar for a comedic role. So there’s another rule: it helps if an Oscar-winning actress is one of your witnesses. Plenty lying about – don’t think Cher is doing much these days, give her a bell. 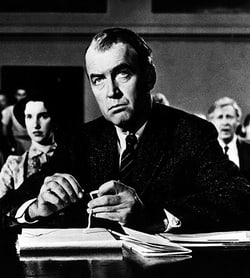 As seen in: Anatomy Of A Murder

See also: Any courtroom scene in any movie, ever.

From its Saul Bass opening credits to its Duke Ellington soundtrack, Anatomy Of A Murder is an absolute masterpiece, and easily one of the finest courtroom dramas ever made.

As noted by many a law professor, it’s also one of the purest and most realistic fictional accounts of a trial, with both sharp-toothed lawyers – city slicker attorney General Claude Dancer (George C. Scott) and small-town lawyer Paul Biegler (James Stewart) – using every legal trick in the book to disprove/prove that army officer Frederick Manion wasn’t victim of an “irresistible impulse” when he murdered the man who’d raped his wife.

Asking exceptionally leading questions, and then, on occasion, retracting them immediately afterwards, Biegler manages not only to get the jury on his side, but also get the real reason for the murder – that is to say, the supposed rape of Manion’s wife Laura (Lee Remick) – on the record. In 1959, this was no mean feat, both in the courts and in the cinema, and thanks to his exceptional court theatrics, dogged nature and persuasive powers over a witness who held a key piece of evidence (“Panties!”), Stewart makes himself a winning case out of what looked like a no-hope disaster. Remember: it’s not what’s on the record – it’s what’s been seen and heard in the courtroom.

4. Give Up The Hooch 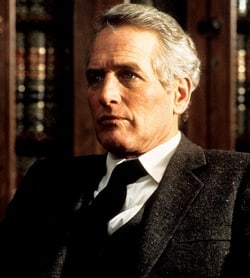 See also: Parnell in Anatomy Of A Murder

When we first meet Paul Newman’s alcoholic medical malpractice lawyer Frank Galvin, he spends most of his days playing pinball, hocking back whiskeys, chasing ambulances and kicking his office to pieces. This, as any lawyer will attest, is not a safe route to a money-spinning legal practice.

So when his former partner Mickey (Jack Warden) gives him – wait for it – “one last job”, he takes it because he wants the cash. More than that, he needs to prove himself that he’s still got what it takes in the courtroom, a place he hasn’t been for decades thanks to lucrative out-of-court settlement deals.

Along the way, he’s shocked to discover that he’s actually doing the right thing, and thanks to the love of a good woman – he’s Paul Newman, after all, good women are all over him like flies – he stops with the drinking, and gets his head in the books.

A clear head and a strong legal mind leads him to hunt down ‘the perfect witness’ (as well as the worst expert witness, but that’s by the by) and despite betrayals, denials, and outright lies, he pulls it off. Whether he keeps off the booze after that, well… old habits die hard, as they say. 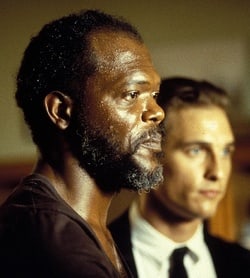 By the time Matthew McConaughey delivers his closing argument in A Time To Kill, things really aren’t looking too great for him. He’s been shot at, his house has been burnt down, his girlfriend has been kidknapped, beaten and left to die and all but one of the jury are leaning towards the death penalty for his client, Carl Lee Hailey (Samuel L. Jackson).

It seems defending a black man for the murder of the two white supremacists that raped, beat and hanged his daughter isn’t that easy. And those KKK fellows sure can get angry, can’t they?

So with everything crumbling around him, and the defendant refusing to take a plea bargain, he goes for broke and delivers the most affecting, emotional and astonishing final argument you’ll ever see in cinema – a closing speech so persuasive and powerful that it takes the jury’s inherent racial prejudices and turns them completely upside down.

And so though he may have made less worthy work later in his career (we’re looking at you, Ghosts Of Girlfriends Past), there is no doubting McConaughey’s acting chops in this, his career highlight. Truly an astounding breakthrough performance, and one hell of a closing argument. 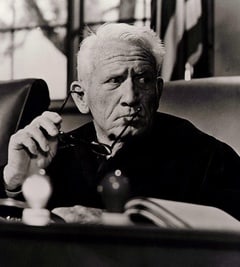 As seen in: Judgement At Nuremberg

When it comes to Judgement At Nuremberg, there are no LOLs to be LOLed, no giggles to be giggled, and no chortles to, um, chortle. This is Winter For Hitler… And Germany.

That’s just the way it is with fictionalised accounts of Nuremberg Trials, and any other movies that deal with the aftermath of the Holocaust, as well as the nature of victors’ justice, patriotism, and individual complicity in state-committed crimes.

Chief Justice Dan Haywood (Spencer Tracy) is the judge who judges the judges (no, really) whose verdicts helped bring about the Holocaust. To find out more about the differing sides of the cases, he speaks to worried potential witnesses and German war widows, and views horrific (real-life) footage of concentration camps.

His findings are definitive: being a Nazi is not a good thing, and it will never, ever help your case by being one or being affiliated with one. 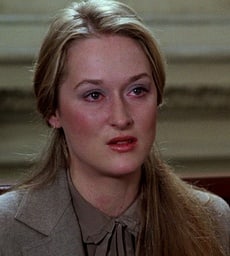 You see, despite making a damn fine case for keeping his nine-year-son Billy (Justin Henry) at home with him, Dustin Hoffman’s Ted Kramer never really stood a chance. As his own lawyer puts it: “In most cases involving a child that young, the court tends to side with the mother.”

When it comes to custody battles, unless the mother has done something incredibly wrong – and leaving home for 18 months just doesn’t count – it’s a damn rare thing that the father wins custody of his child.

So try as he might, and with his lawyer being tough with his ex-wife Joanna (Meryl Streep) in the dock (“Do you want the kid, or don’t you?”), there was never really any doubt. And to appeal would mean putting Billy in the dock, so… bar an extreme change of heart from Joanna – and a couple of emotional moments in some lifts – Bill and Ted won’t be living together no more. That’s right, Bill and Ted. Bet you didn’t notice that before, didya?

8. Pray For A Sympathetic Jury 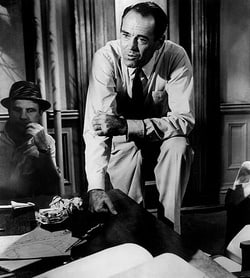 At the beginning of 12 Angry Men, the jury is not sympathetic in the slightest – apart from one man, Juror number 8 (Henry Fonda), who stands alone in saying that the teenage boy accused of killing his father deserves a fair deliberation.

But one by one, the jurors change their mind – because of pure sympathy, distrusting the evidence, or in one case, wanting to get back in time to watch a baseball game.

It’s a taut, tense, dramatic movie that manages to break so many real legal rules (ask any lawyer and they’ll explain why in worryingly great detail) but still cleverly makes you believe in the jury system and the importance of a fair and balanced trial.

With that in mind, and knowing that you didn’t actually commit the crime you’re in the dock for, you should be fine. Should be. Please don’t trust us on that one. 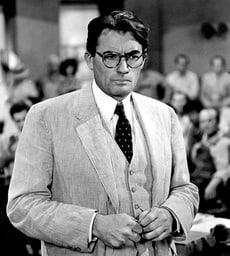 Gregory Peck’s portrayal of Atticus Finch is such a monumental symbol of legal integrity and equal rights that his image is indelibly imprinted on the original novel’s character. Try reading the book without thinking of him. Go on, we dares ya.

What Peck’s finch does for the PR of the legal profession genuinely cannot be underestimated – he’s a gentleman, a scholar, and a man of principle to the last – and is a major judicial influence, even now.

It’s of course a shame then, in so many, many ways, that he did not win the case he was assigned by the court. Tom Robinson (Brock Peters), who is accused of raping a young white woman, Mayella Ewell, is sent to jail, despite Finch unequivocally proving that all the witnesses for the prosecution are lying through their teeth.

But Finch’s failure is not his fault... It's the system’s and the inherent racism of the town and the time. So remember then that if you’ve fought tooth and nail for your client, that’s all you ever could have done. And maybe, just maybe, there might be some poetic justice and the real culprit will have his just desserts later down the line.
WARNING: SPOILERS !!

Here's the movie way to win a court case.

My World Cinema Lists by jaytoast

Movies I found overrated by moviewatcher122

The Most Important Albums by drugs

It's Not Just Background Music by drugs

Tell Me Why by drugs