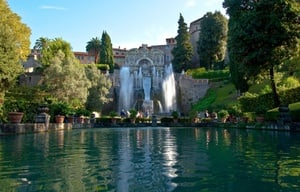 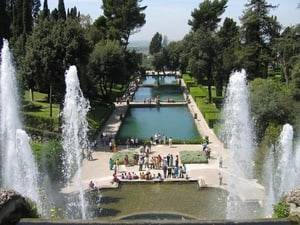 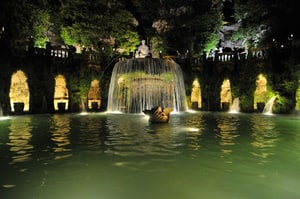 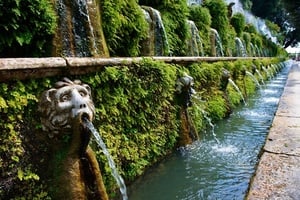 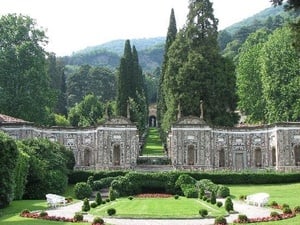 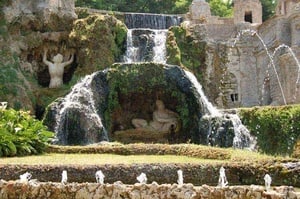 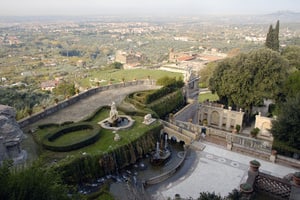 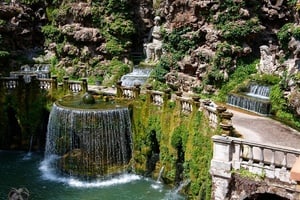 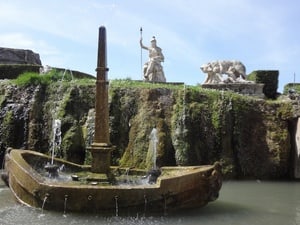 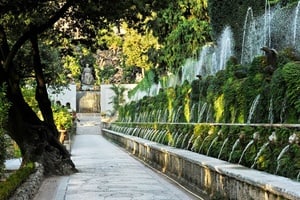 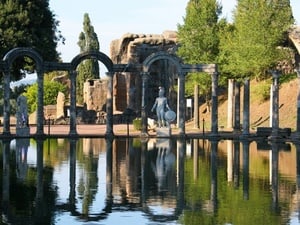 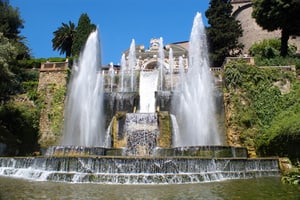 The Villa d'Este is a villa in Tivoli, near Rome, Italy. Listed as a UNESCO world heritage site, it is a fine example of Renaissance architecture and the Italian Renaissance garden.

Park of the Villa d'Este, Carl Blechen, 1830. The overgrown garden appealed to the Romantic imagination; today this same view is once again manicured
The Villa d'Este was commissioned by Cardinal Ippolito II d'Este, son of Alfonso I d'Este and Lucrezia Borgia and grandson of Pope Alexander VI. He had been appointed Governor of Tivoli by Pope Julius III, with the gift of the existing palace, which he had entirely reconstructed to plans of Pirro Ligorio carried out under the direction of the Ferrarese architect-engineer Alberto Galvani, court architect of the Este. The chief painter of the ambitious internal decoration was Livio Agresti from Forlì. From 1550 until his death in 1572, when the villa was nearing completion, Cardinal d'Este created a palatial setting surrounded by a spectacular terraced garden in the late-Renaissance mannerist style, which took advantage of the dramatic slope but required innovations in bringing a sufficient water supply, which was employed in cascades, water tanks, troughs and pools, water jets and fountains, giochi d'acqua. The result is one of the series of great 17th century villas with water-play structures in the hills surrounding the Roman Campagna, such as the Villa Lante, the Villa Farnese at Caprarola and the Villas Aldobrandini and Torlonia in Frascati. Their garden planning and their water features were imitated in the next two centuries from Portugal to Poland.

Drawing inspiration (and many statues and much of the marble used for construction) from the nearby Villa Adriana, the palatial retreat of Emperor Hadrian, and reviving Roman techniques of hydraulic engineering to supply water to a sequence of fountains, the cardinal created a fantasy garden. Its architectural elements and water features had an enormous influence on European landscape design.

Pirro Ligorio, who was responsible for the iconographic programs worked out in the villa's frescos, was also commissioned to lay out the gardens for the villa, with the assistance of Tommaso Chiruchi of Bologna, one of the most skilled hydraulic engineers of the sixteenth century; Chiruchi had worked on the fountains at Villa Lante. At Villa d'Este he was assisted in the technical designs for the fountains by a Frenchman, Claude Venard, who was a manufacturer of hydraulic organs.

THE CEILING FRESCOES OF THE VILLA

Cardinal Alessandro d'Este (it) repaired and extended the gardens from 1605. In the eighteenth century the villa and its gardens passed to the House of Habsburg after Ercole III d'Este bequeathed it to his daughter Maria Beatrice, married to Grand Duke Ferdinand of Habsburg. The villa and its gardens were neglected. The hydraulics fell into disuse, and many of the sculptures commissioned by Ippolito d'Este were scattered to other sites. The picturesque sense of decay recorded by Carl Blechen and other painters was reversed during the tenure of Cardinal Gustav Adolf Hohenlohe; the Cardinal hosted Franz Liszt, who evoked the garden in his Les Jeux d'Eaux à la Villa d'Este and gave one of his last concerts here. Villa d'Este was purchased for the Italian State after World War I, restored, and refurnished with paintings from the storerooms of the Galleria Nazionale, Rome. Jean Garrigue's volume of poems A Water Walk by Villa d'Este (1959) continues a long tradition of poetry inspired by the gardens. Kenneth Anger filmed Eaux d'artifice among the water features of the garden. Thus the Villa has been celebrated in poetry, painting and music.

The grounds of the Villa d'Este also house the Museo Didattico del Libro Antico, a teaching museum for the study and conservation of antiquarian books.

The garden plan is laid out on a central axis with subsidiary cross-axes, refreshed by some five hundred jets in fountains, pools and water troughs. The water is supplied by the Aniene, which is partly diverted through the town, a distance of a kilometer, and, originally, by the Rivellese spring, which supplied a cistern under the villa's courtyard (now supplied by the Aniene too). The garden is now part of the Grandi Giardini Italiani.

The Villa's uppermost terrace ends in a balustraded balcony at the left end, with a sweeping view over the plain below. Symmetrical double flights of stairs flanking the central axis lead to the next garden terrace, with the Grotto of Diana, richly decorated with frescoes and pebble mosaic to one side and the central Fontana del Bicchierone ("Fountain of the Great Cup"), planned by Bernini in 1660, where water issues from a seemingly natural rock into a scrolling shell-like cup.

To descend to the next level, there are stairs at either end — the elaborate fountain complex called the Rometta ("the little Rome") is at the far left — to view the full length of the Hundred Fountains on the next level, where the water jets fill the long rustic trough, and Pirro Ligorio's Fontana dell'Ovato ends the cross-vista. A visitor may walk behind the water through the rusticated arcade of the concave nymphaeum, which is peopled by marble nymphas by Giambattista della Porta. Above the nymphaeum, the sculpture of Pegasus recalls to the visitor the fountain of Hippocrene on Parnassus, haunt of the Muses.

This terrace is united to the next by the central Fountain of the Dragons, dominating the central perspective of the gardens, erected for a visit in 1572 of Pope Gregory XIII whose coat-of-arms features a dragon. The sound of this fountain was in contrast to a nearby Uccellario with artificial birds. Central stairs lead down a wooded slope to three rectangular fishponds set on the cross-axis at the lowest point of the gardens, terminated at the right by the water organ (now brought back into use) and Fountain of Neptune (belonging to the 20th century restorations).
(Wikipedia)

Unreal Isolated Houses That Are Breathtakingly.... by Milena

painting by Issac Maimon by malenna

Art of Wolfgang Harms by Nusch

The Best of Caravaggio by Kenji