Famous Caves in the World 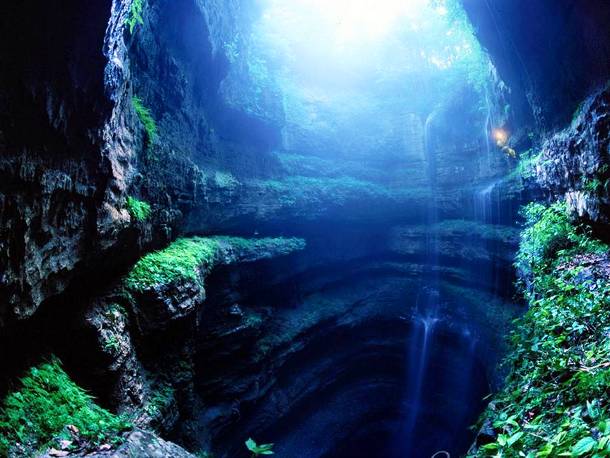 Cave of the Swallows – Aquismon, Mexico.
An open airpit cave situated at the Municipality of Aquismon in Mexico, it has freefall drop of 333 m from the floor of the cave to the lowest side of the opening, with 370 m drop from the highest side. The 2nd deepest pit in Mexico and the 11th in the world, a skyscraper like the NYC Chrysler Building could easily fit. The cave has low temperatures with thick vegetation at the mouth and rains can cause waterfalls to cascade into its opening. Aside from the layers of debris and guano, you can also find a sinkhole in a fault of the lower Cretaceous limestone, which can go down further to 512 m. 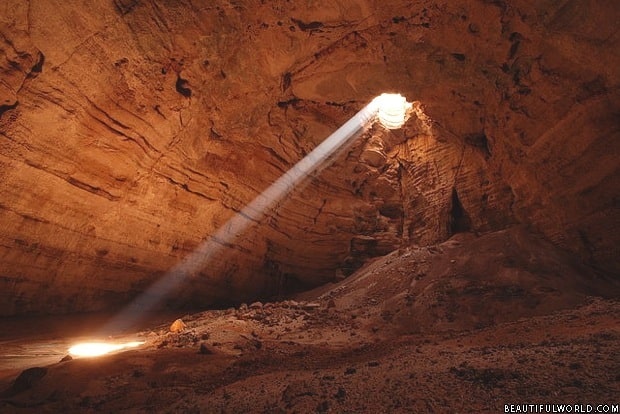 Majlis al Jinn Cave – Muscat, Oman.
This cave is located in the Selma Plateau, 1,380 m above sea level in the Sultanate of Oman. Formed in fossilliferous carbonate rocks, it is the 9th largest cave chamber in the world. A single chamber alone measures about 310 m by 225 m with a free-standing roof about 40 m thick. The cave has a volume of 4,000,000 cubic meters, while its floor area is about 58,000 square meters. Its deepest part is about 178 m below the top of the highest entrance. 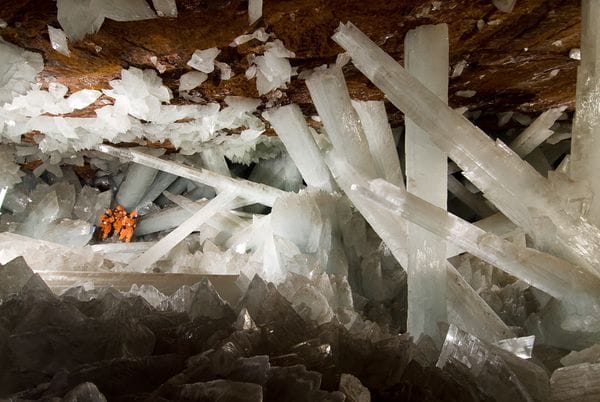 Cave of the Crystals -Mexico.
The Cave of the Crystals was discovered in 2000 by miners excavating a new tunnel for the Naica Mine in northern Mexico. The main chamber contains some of the largest natural crystals ever found in any of the underground caves around the world. The cave’s largest crystal found to date is 11 meters (36 feet) in length, 4 meters (13 feet) in diameter and 55 tons in weight. The crystals became so large because of the extremely hot temperatures inside the cave, reaching a steamy 58 degrees Celsius (136 degrees Fahrenheit), that allowed microscopic crystals to form and grow. 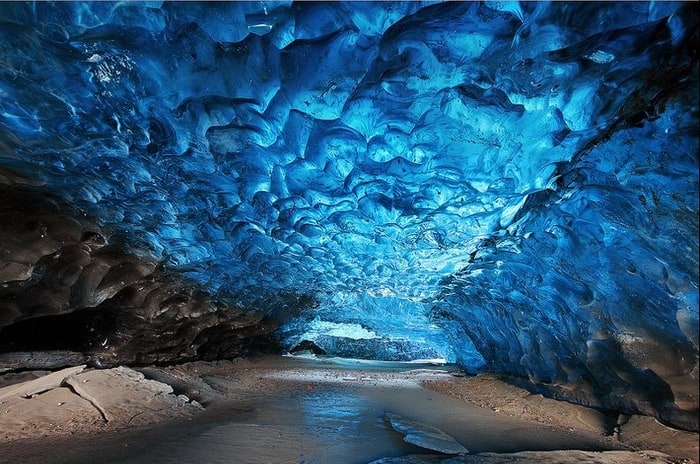 Ice Cavern – Skattafel, Iceland.
The Kverkfjöll ice cave, located in a frozen lagoon in Skattafel, Iceland, is considered one of the most famous glacier caves in the world. Formed by the hot water from a volcanic spring below Vatnajökull glacier, it was discovered during an expedition in the 1980s. 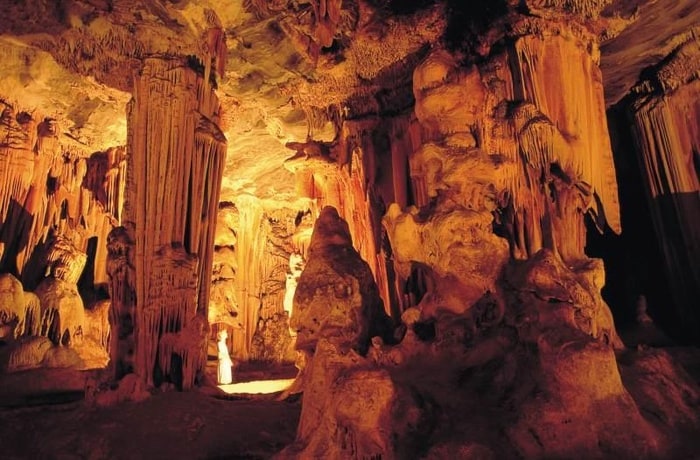 Cango Caves – Western Cape, South Africa
Situated in the Precambrian limestones at the foothills of Swartberg range in the Western Cape, South Africa, it is one of the country’s finest sites for cave exploration and attracts a number of foreign visitors. The caverns are composed of an extensive system of tunnels and chambers that go on for nearly 4 km, though only a quarter of those are open to the public. Some of the tours conducted by guides are the ‘Standard Tour,’ which can take an hour; while an ‘Adventure Tour’ can take an hour and half as you crawl through narrow passages and climb over steep rocks guided only by small flickering lights. 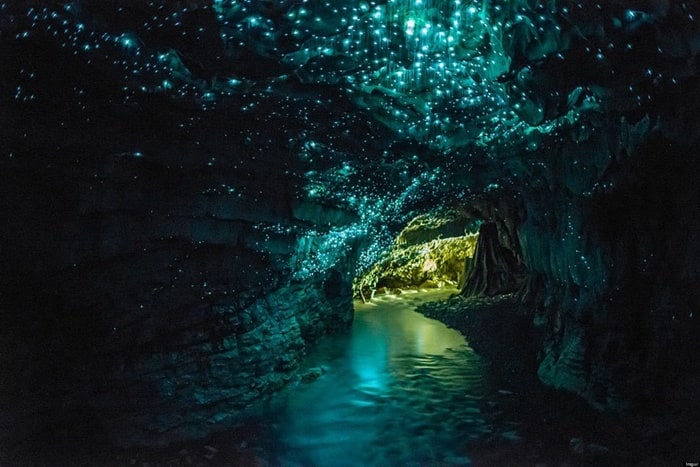 Glowworm Cave – Waitomo, New Zealand.
A cave at Waitomo on the north island of New Zealand, it is known for the population of glowworms that are around the size of an average mosquito. It is part of the Waitomo Cave system along with the Ruakuri Cave and the Aranui Cave. Unique only to New Zealand, this is a must-see for any traveler who can enjoy a boat ride amidst thousands of glowworms illuminating the cave and be a part of over 120 years of cultural and natural history. 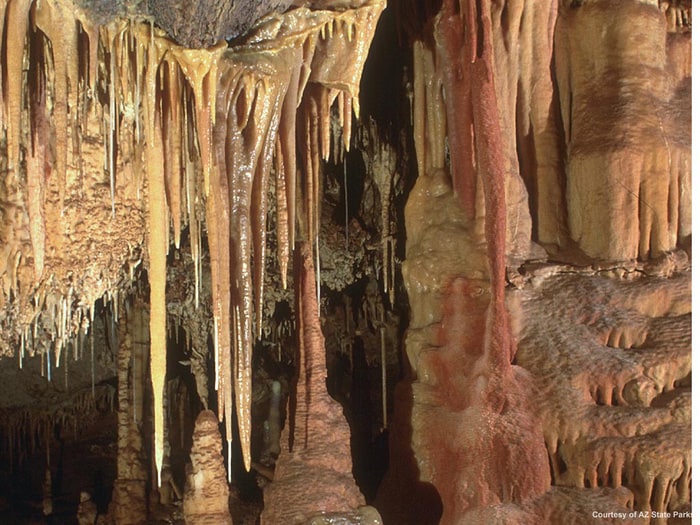 Kartchner Caverns – Arizona, USA.
Located in Arizona State Park, this show cave with 2.4 miles of passages was discovered by local cavers in 1974. Long hidden from view, the caves are carved out from limestone and filled with peleothems, which has been growing for more than 50,000 years. Tours of the caves open to the public include the Throne Room, where you can find the world’s longest soda straw stalactites at 6.54 m and the Kublai Khan, a 58-foot high column named after the poem. It also includes the Big Room, which consists of the most extensive formation of brushite moonmilk in the world, because it is a nursery roost for more than 1,000 cave bats. Other caverns that can be accessed by the public include the Cul-de-sac Passage, Mud Flats, Strawberry Room, and the Rotunda Room. 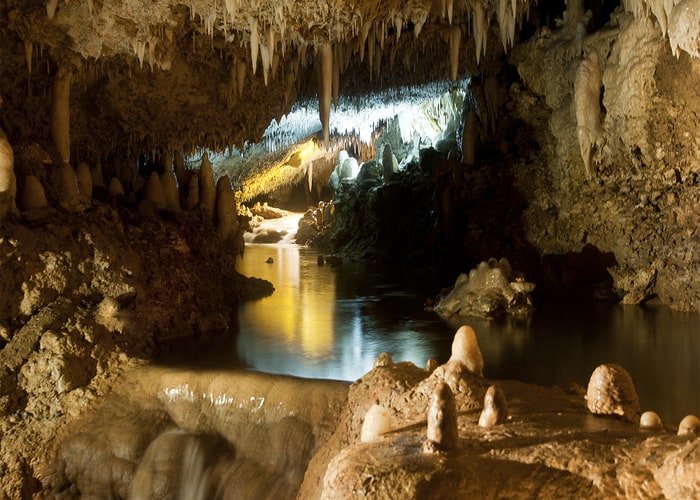 Harrison’s Cave – Allen View, Barbados.
Named after Thomas Harrison who owned the area in the early 1700s, Harrison Cave was rediscovered in 1974 by Ole Sorensen, an engineer and cave adventure enthusiast from Denmark and was later developed by the government of Barbados as a show cave and attraction. The caves, which were opened to the public in 1981, are formed naturally through water erosion via the limestone rock. The guided tour usually starts at “The Great Hall,” a huge cavern 100 ft in height; and is followed by a stop at ”The Village,” where formations have joined to form columns after thousands of years. 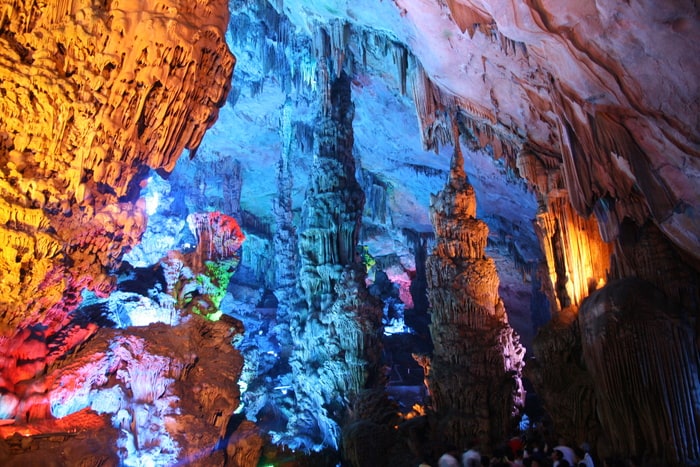 Reed Flute Cave -China.
A landmark and a tourist attraction outside the city of Gullin in Guangxi, China, its name was derived from the reeds growing inside the cave that are ideal for flute making. It offers magnificent rock and mineral formations, stone pillars, and carbon deposits. Illuminated by different colored lights, it has been one of Gulin’s most interesting tourists’ attractions for the past 1,200 years. Rediscovered in 1940s by a group of refugees, this 180 years old cave has more than 70 inscriptions written in ink that date as far as 792 AD to the Tang Dynasty. 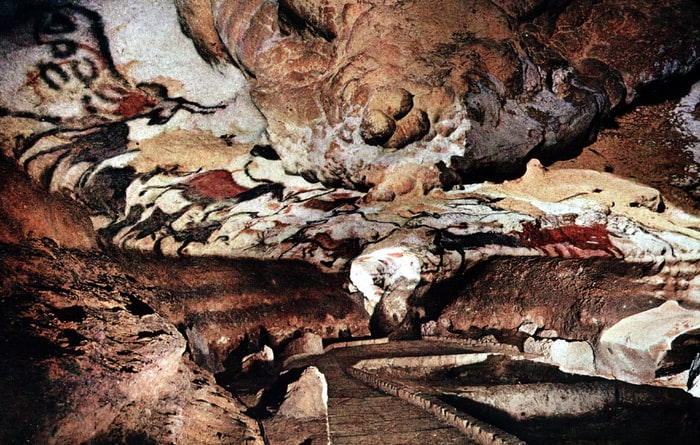 Lascaux Caves – Motignac, France.
he location of some complex caves in southwestern France, it is more famous for its Paleolithic cave paintings, which were discovered by a teenager in the 1940s. The Paleolithic art, which is estimated to be 17,300 years old consists of images of large animals known to exist in the area due to fossil evidence. Listed as a UNESCO World Heritage Site in 1979, it was opened in 1948 but was closed down to the public until 1963 to preserve the art. The rooms in the cave that you can explore include the Chamber of Felines, the Hall of the Bulls, the Apse, the Nave, the Shaft, and the Passageway. 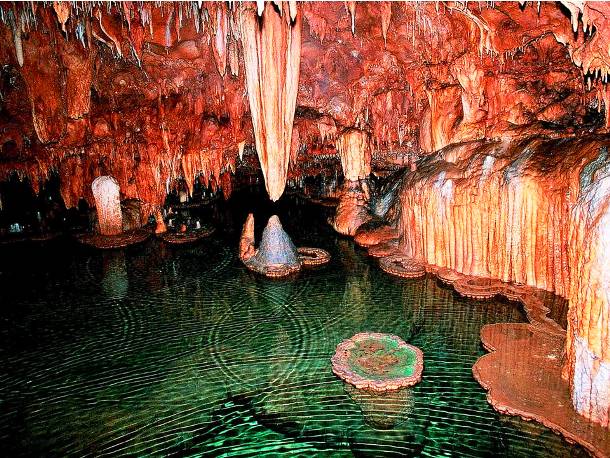 Onondaga Cave – Missouri, USA.
his cave in Leasburg belongs to Missouri National Park, which was established in 1982. Although it was first settled by people in the 1850s, it has a history of land disputes and vandalism. It is now secured as a protected national park where cave tours, swimming, fishing, picnicking and hiking are being offered at the visitor’s center, which also has a nature museum. The Onondaga Cave boasts of towering stalagmite, dripping stalactites and other active flowstones. 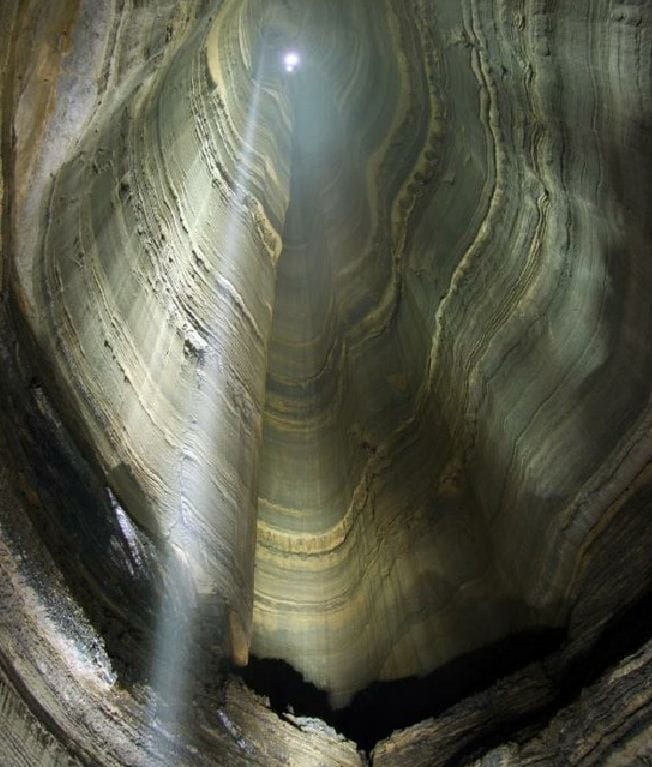 Fantastic Cave Pit – Georgia, USA.
Located in Ellison Caves, east of Lafayette, Georgia, the Fantastic cave is 586 ft deep. Known as the deepest cave in the United States, it is big enough to hold the Washington Monument. 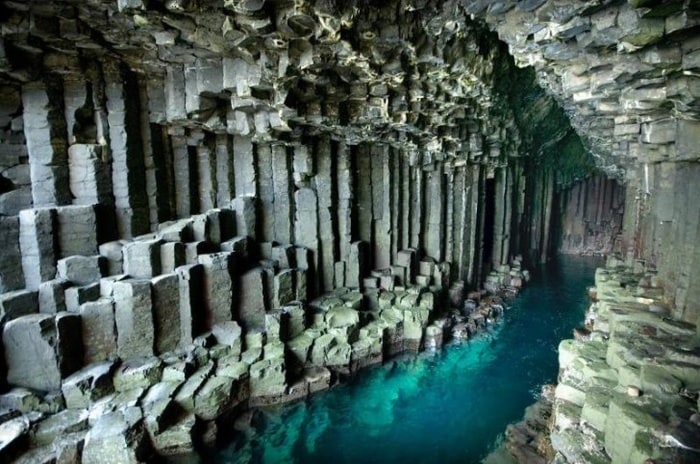 Fingal Cave – Staffa, Scotland.
A sea cave on the uninhabited island of Staffa in Scotland, it was formed entirely from hexagonally-jointed basalt columns within a Paleocene lava flow. It is well-known for its naturally arched roof, which produces eerie sounds made by the echoes of the waves to give the atmosphere of a natural cathedral. 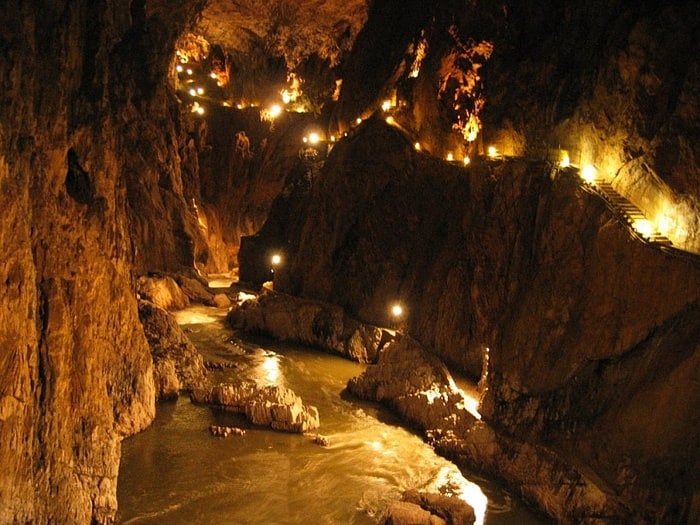 Škocjan Caves – Slovenia.
A protected cave system in Slovenia, the cave is just 2 miles long but attracts year-round tourists and visitors. It consists of the Reka River, which goes underground for an additional 21 miles and represents one of the longest ‘karst’ underground wetlands in Europe. It became a UNESCO World Heritage Site in 1986 and was lauded by the scientific community as one of Earth’s natural treasures. 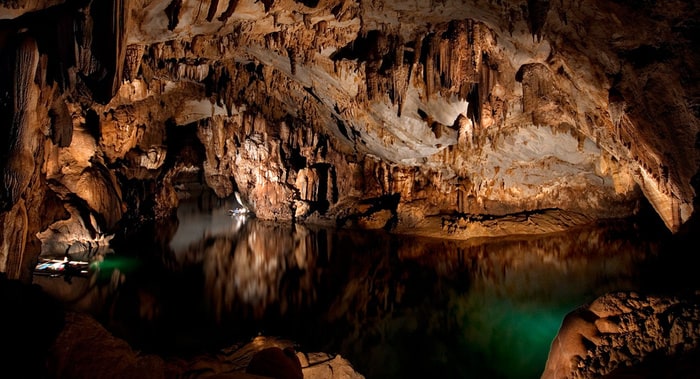 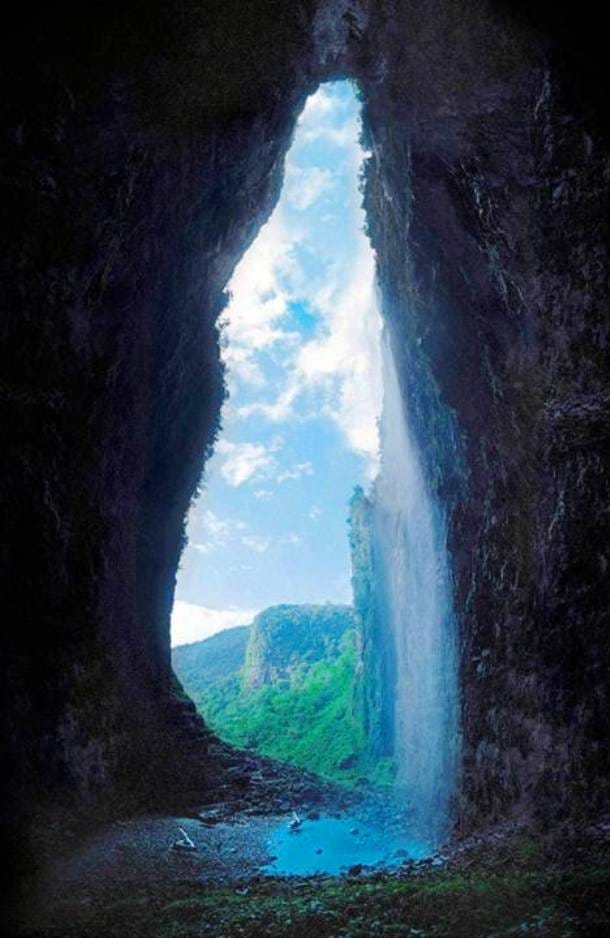 Cave of the Ghost – Cainama National Park, Venezuela.
Also known as ‘La Cueva del Fantasma,’ this is an interesting cave located in southern Venezuela. Situated in one of the most biologically rich and geologically ancient parts of the world in the Aprada tepui, it is just barely large enough to contain two helicopters. However, experts believed that this is not actually a cave but a collapsed steep gorge. 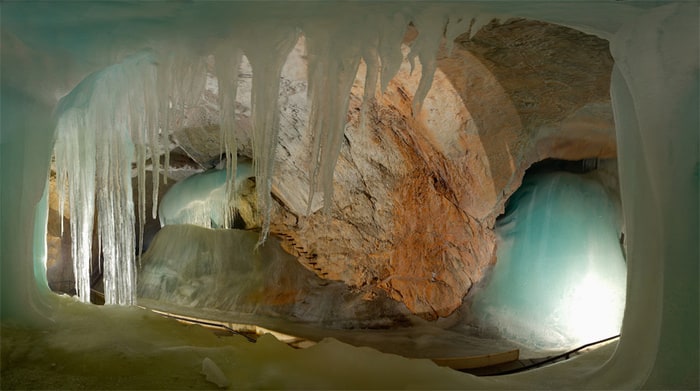 Eisriesenwelt Cave -Austria.
Eisriesenwelt, the German word for “World of the Ice Giants,” is made from natural limestone ice, which is located in Werfen, Austria. Found inside the Hochkogel Mountain, a Tennengebirge section of the Alps, it is considered the ‘largest ice cave in the world.’ Extending more than 42 km, it draws about 200,000 tourists each year due to the ice formations of the cave, which were formed by thawing snow that drained into the cave and froze during winter. During the chilly winter, the winds blow into the cave and freezes the snow inside; while in summer, the cool wind from inside the cave prevents it from melting.

Beauty in Chilean Actresses by xolmis

Misc. Pictures That Struck My Fancy, part 3 by Iceviper

The most important Polish movies by Venice

Thylane Blondeau I by Venice