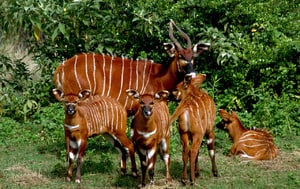 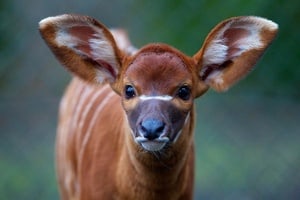 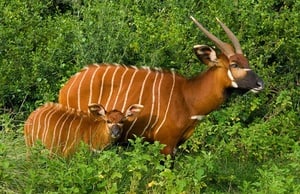 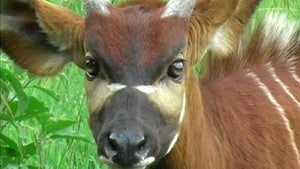 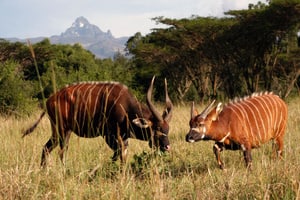 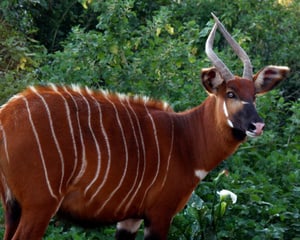 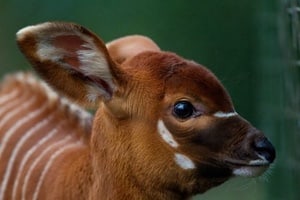 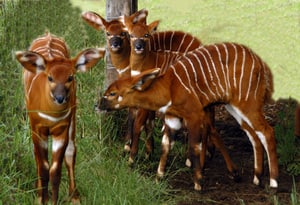 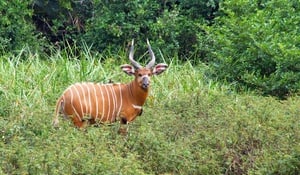 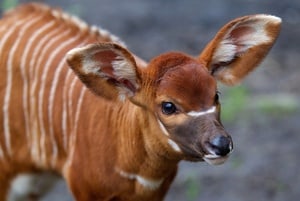 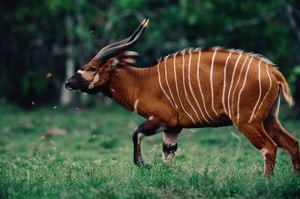 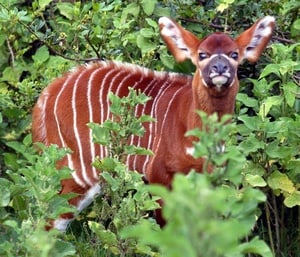 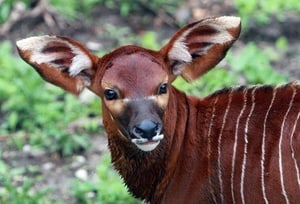 The bongo (Tragelaphus eurycerus) is a herbivorous, mostly nocturnal forest ungulate; it is among the largest of the African forest antelope species.

Bongos are characterised by a striking reddish-brown coat, black and white markings, white-yellow stripes and long slightly spiralled horns. Indeed, bongos are the only tragelaphid in which both sexes have horns. They have a complex social interaction and are found in African dense forest mosaics.

The western or lowland bongo, T. e. eurycerus, faces an ongoing population decline, and the IUCN Antelope Specialist Group considers it to be Near Threatened on the conservation status scale.

The eastern or mountain bongo, T. e. isaaci, of Kenya, has a coat even more vibrant than that of T. e. eurycerus. The mountain bongo is only found in the wild in one remote region of central Kenya. This bongo is classified by the IUCN Antelope Specialist Group as Critically Endangered, with more specimens in captivity than in the wild.

In 2000, the Association of Zoos and Aquariums in the USA (AZA) upgraded the bongo to a Species Survival Plan participant and in 2006 added the Bongo Restoration to Mount Kenya Project to its list of the Top Ten Wildlife Conservation Success Stories of the year. However, in 2013, it seems, these successes have been negated with reports of possibly only 100 mountain bongos left in the wild due to logging and poaching.
(Wikipedia)

13 votes
My Own Favourite Lists (118 lists)
list by Kenji
Published 7 years, 3 months ago

History, Literature and Cinema by SFG¿mystic

Music & Musical I Loved by Reno

the giraffe's lists of lists guide by the giraffe

Beautiful Films: The Innocents by Kenji