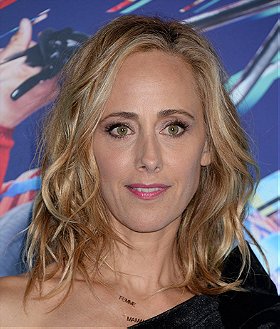 Raver was raised in New York City by her mother, Tina Raver, and her stepfather, Chris Meltesen. She has a sister, Cybele Raver, as well as three half sisters, Nadja Raver, Grace Raver, Aimée Raver, and two half brothers, Jacob Raver, and William Raver. A fine arts graduate of Boston University, Raver continues to study theater in New York with teacher and mentor Wynn Handman. She is fluent in French and German, a language that she learned as a child from her German-born mother.

Together with her husband Manuel Boyer she has two sons, Luke West (b. 2002) and Leo (b. 2007). Leo Kipling Boyer was born on October 9, 2007, in New York City where Raver was performing in Lipstick Jungle. Raver returned to work on the show only a few weeks after giving birth.

At the beginning of her adult career, Raver acted in commercials for Visa and Jeep. Her first prominent role was her Broadway debut in 1995 in the Philip Barry play "Holiday" in which she co-starred with Laura Linney and Tony Goldwyn. She also appeared in the feature film City Hall with Al Pacino. She also co-starred with John Spencer (of NBC's The West Wing) and David Schwimmer in "The Glimmer Brothers", a production of the Williamstown Theatre Festival, written by Warren Leight. After her time on Third Watch, she was cast as Audrey Raines in the popular television series 24, and was a series regular for two seasons.

Raver briefly filled in for Arianne Zucker as Nicole Walker on Days of our Lives in January 2002.

During the Fall 2006 television season, Raver starred in the ABC television series The Nine. Although the show received outstanding critical reviews, it did not take off in the Nielsen ratings, and was therefore cancelled. She reprised her role in 24's season 6 as Audrey Raines. The character was in a catatonic state at the end of the season.

Look Left voted for an image 6 days, 16 hours ago

kerem1923 voted for an image 1 month ago

Madinina voted for an image 1 year ago

Magdalena added this to a list 2 years, 8 months ago
Actresses (older) (553 person items)

EatMorePez voted for an image 3 years ago

belen33 voted for an image 3 years, 4 months ago