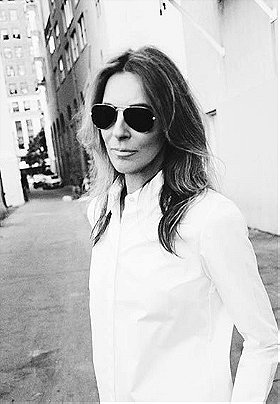 Director, artist, writer and producer Kathryn Bigelow was born on November 27, 1951, in San Carlos, California. Known for her incredible visuals and heart-pounding action sequences, Kathryn Bigelow is one of today's most fascinating directors. Bigelow was inspired in part by her father, who liked to draw cartoons. "His dream was being a cartoonist, but he never achieved it ... I think part of my interest in art had to do with his yearning for something he could never have," she later told Newsweek.

Bigelow studied painting at the San Francisco Art Institute after finishing high school. Winning a scholarship, she then moved to New York City to attend the Independent Study Program at the Whitney Museum of Art in 1972. Bigelow eventually changed her focus to another visual medium: film. "My movement from painting to film was a very conscious one. Whereas painting is a more rarefied art form, with a limited audience, I recognized film as this extraordinary social tool that could reach tremendous numbers of people," Bigelow explained to Interview magazine.

She made her first short movie, The Set-Up, in 1978. The film explored the topic of violence, which would become a recurring theme in her work. She earned her master's degree in film theory and criticism from Columbia University in 1979, and moved on to feature-length projects. In 1981, Bigelow created The Loveless, featuring Willem Dafoe, which was partly inspired by her love of the 1954 classic film, The Wild Ones. The movie earned critical acclaim, but she attracted more notice for her next effort, Near Dark (1987), a vampire tale set in the American West.

In 1989, she released her first major studio project, Blue Steel. The film starred Jamie Lee Curtis as a rookie police officer who becomes entangled with a murderer, played by Ron Silver. Reviews for the film were mixed, with some criticizing its weak plot and intense violence while others praised its imagery.

Bigelow's next project was 1991's Point Break, starring Keanu Reeves and Patrick Swayze. Reeves played an FBI agent trying to capture a gang of surf-loving bank robbers led by Swayze's character. She worked on the film with her husband, director James Cameron, who was known at the time for such blockbuster films as The Terminator and Aliens.

Next, Bigelow tried her hand at television, directing the 1993 science fiction miniseries Wild Palms. Back on the big screen, she directed the futuristic action thriller Strange Days (1995), which starred Ralph Fiennes. She co-wrote the film with her ex-husband, who also served as a producer on the project. In the film, Fiennes played a dealer of recordings of other people's experiences, which his customers could replay in their own minds. While it failed to attract much of an audience during its theatrical run, the film has developed a cult following. Bigelow also wrote the screenplay for the 1996 cable television thriller Undertow.

After directing some episodes of the television crime drama Homicide: Life on the Streets, Bigelow worked on another thriller, The Weight of Water (2000), with Catherine McCormack, Sarah Polley, and Sean Penn. She then took on a real-life drama with 2002's K-19: The Widowmaker starring Harrison Ford and Liam Neeson. Set in 1961, the film tackled a historical disaster that took place on a Russian nuclear submarine.

Returning to television, Bigelow directed episodes of the crime drama Karen Sisco and The Inside. She had helped develop The Inside, a crime drama about FBI agents hunting serial killers, from an article written by journalist Mark Boal. She and Boal later joined forces to create The Hurt Locker (2009), one of her most critically acclaimed feature films.

The Hurt Locker was drawn from Boal's experiences covering the Iraq War. The film tells the story of an army Explosive Ordnance Disposal team, led by Staff Sargeant William James (played by Jeremy Renner). "I was fascinated by his stories—by the idea that these bomb technicians are always walking toward the thing that everybody else is running away from. It's kind of an epic, lonely walk that only the man in the bomb suit performs," Bigelow explained to Marie Claire magazine.

The Hurt Locker was lauded by critics for its suspenseful action and realistic depiction of soldiers during wartime. A critic for The New Yorker described the film as "the most skillful and emotionally involving film yet made about the conflict ... a small classic of tension, bravery, and fear." The Hurt Locker won numerous awards, including BAFTA honors for best director and best film. Additionally, Bigelow won an Academy Award for best director for her work on the film—becoming the first woman to receive this honor.

In an odd twist of fate, Bigelow was up for several Academy Awards—nominated alongside her ex-husband in the best director and best picture categories. Bigelow took both categories, and the film won an additional four awards.

SomeBloke voted for an image 1 hour, 34 minutes ago

samira voted for an image 7 months, 1 week ago

Darthmasco added this to a list 2 years, 6 months ago
Sagittarius (277 person items)

Stehako added this to a list 4 years, 2 months ago

moviebuff added this to a list 4 years, 2 months ago
Moviebuff's Top 15 Most Influential Filmmakers (15 person items)

Exclusive added this to a list 4 years, 12 months ago
My Favorite Directors: Kathryn Bigelow (8 movies items)

editorofit added this to a list 5 years, 4 months ago
Producers Who Should Work With DC or Marvel (20 person items)

MarkusT90 added this to a list 5 years, 10 months ago
My Favorite Directors (92 person items)

hulkargh added this to a list 6 years, 3 months ago
Best Directors (33 person items)

moviebuff added this to a list 6 years, 8 months ago
Most Influential Filmmakers (47 person items)