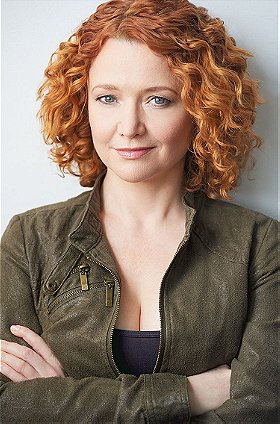 57 votes
For The Love Of Redheads! (100 items)
list by TrekMedic
Published 4 years, 8 months ago

12 votes
Actresses Who Have Played A Lesbian/Bi Character (68 items)
list by Malú
Published 7 years, 2 months ago

Karyn Elizabeth Dwyer was born in Corner Brook, Newfoundland to two school teachers, Donald and Elizabeth Dwyer, who were of Scottish and Irish Catholic descent. She was the oldest of five children. Her father died of cancer in 1982 at the age of 38. After his death, her family moved to her mother's hometown of Wabana on Bell Island, Newfoundland and later St. John's.

Dwyer studied acting with Youth Theatre. She made her stage debut at the Arts and Culture Center at the age of 10, playing the title role in Theatre Newfoundland and Labrador's production of Alice in Wonderland and went on to become an accomplished child stage actress performing in various theatres throughout Newfoundland and Labrador. She also performed in her school productions, won awards for acting, public speaking, singing and instrumental performance and wrote for the school newspaper. She turned down a journalism scholarship from Carleton University and instead moved to Toronto to attend the George Brown Theatre School. Dwyer attended theatre school for one year and then began studying with David Rotenberg's on-camera acting class in Toronto and later John Riven's Meisner.

After moving to Toronto, Dwyer landed her first film role acting opposite David Cronenberg in the Canadian cult classic Boozecan. She soon began appearing regularly in film and television roles opposite actors such as Jon Voight, Gary Busey, Jacqueline Bisset and Julian Sands.

She wrote and starred in her one-woman show Bad Girls at the Rivoli in Toronto. In 1994 she played Phoebe in As You Like It opposite Seana McKenna and Albert Schultz in the Du Maurier World Stage theatre festival.

In 1999 Dwyer starred as 19-year-old Maggie in the lesbian-themed film Better Than Chocolate, winning the role over hundreds of others who auditioned in a cross Canada search. The film won numerous audience choice awards at film festivals around the world, was ranked 31st on The Hollywood Reporter's Top 200 independent films list of 1999 and had one of Canada's highest international box office grosses, earning Dwyer a loyal cult following.

Better Than Chocolate opened to rave reviews at both The Berlin Film Festival and the Vancouver International Film Festival. It was hailed by Variety as "a terrifically entertaining romantic comedy." The Hollywood Reporter called Dwyer "the film's heart and soul", Better Than Chocolate ranked 31 on The Hollywood Reporter's list of best independent films. The Chicago Tribune review declared that the "highlight of the movie is unquestionably Dwyer's performance as Maggie."

Also that year, Dwyer played Summer Falls in the bigger budget studio film Superstar playing opposite Molly Shannon and Will Ferrell and produced by Lorne Michaels. Dwyer returned to the stage playing the title role in Native Earth's Romeo and Juliet, performance artist Sooze in Eric Bogosian's Suburbia and originated the role of Carrie, a junkie prostitute in Exercises in Depravity, opposite R.H. Thompson.

True to her roots, Dwyer returned to Newfoundland where she studied filmmaking at NIFCO, guest starred on Republic of Doyle, and shared her talent at 'For the Love of Learning, Inc', a not-for-profit empowerment and creativity-based learning program, teaching theatre to Newfoundland and Labrador's youth to use their creativity to overcome social and/or economic obstacles.

django123 voted for an image 2 years, 4 months ago

joseph voted for an image 2 years, 5 months ago

TrekMedic added this to a list 2 years, 10 months ago
For The Love Of Redheads! (100 person items)

RayThomas663 voted for an image 2 years, 11 months ago